It can be hard keeping the kids entertained over the loooong school holidays, can’t it? We often go to Salcey Forest, as it’s not far from us and gives us all a good walk and some fresh air. When Joanna from Fire and Air asked us to to review one of their Magical Lessons For Muggles sessions* in the forest, I was keen to give it a go.

I’m not the most outdoorsy person, I have to admit. But the girls take after their dad and love being out in the fresh air, so off we went to the forest and parked up. Although Salcey Forest is free to visit, you do have to pay to park, so don’t forget! 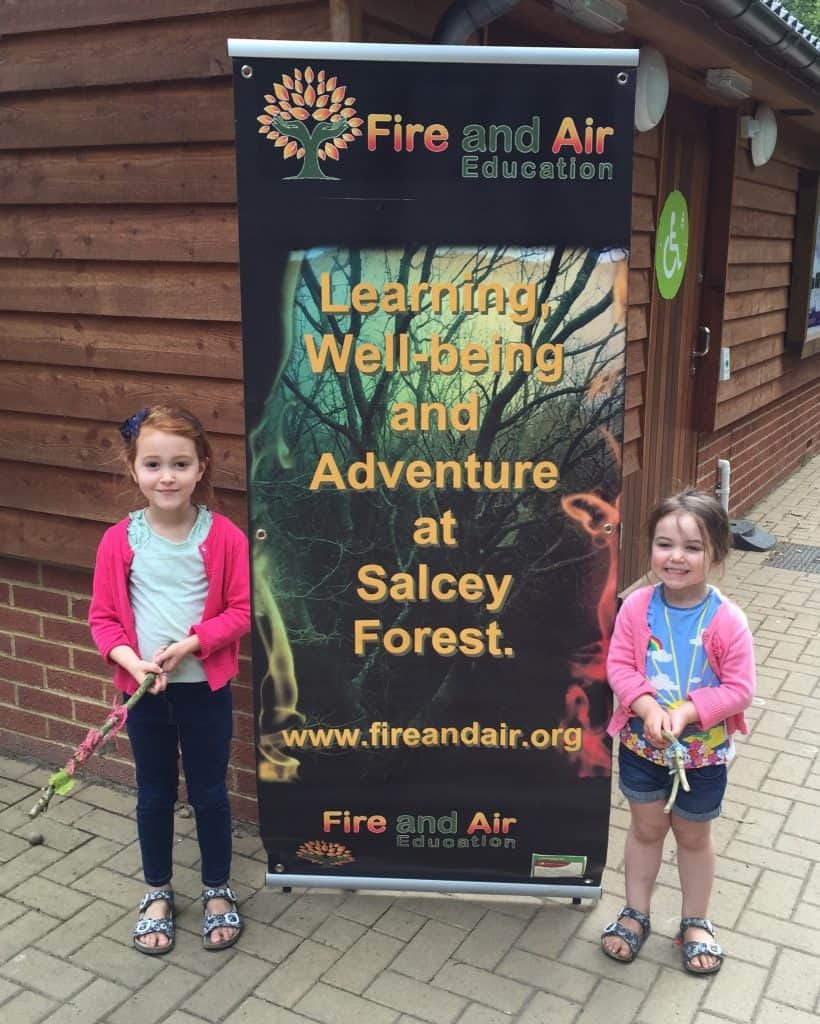 You may have guessed from the title that the session has a slightly magical theme, and our guide Joanna was dressed as a very kind witch. She started off by showing us all some pictures, and samples of animal-related things, and got the kids to guess what they were. 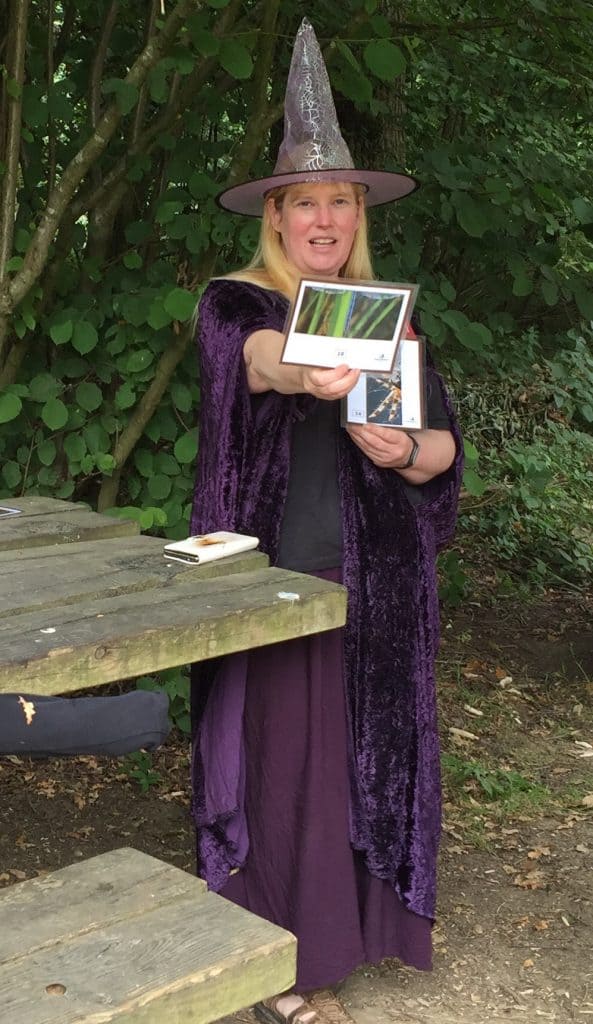 Then we all trooped into the forest, where we got a lesson on how to use loppers (long handled shears). Now I must admit I haven’t ever used these before, so it was interesting to know how to use them properly. Joanna was very good at explaining how to hold them and use them safely, to cut off short lengths of sticks. She gave each child a chance to hold them and asked them questions to make sure they had been listening. We headed off to find some sticks, which we later tied on the treasures we found, to make a kind of memory stick.

Then we went looking for signs that an animal had been there, either droppings, prints, fur, feathers etc. 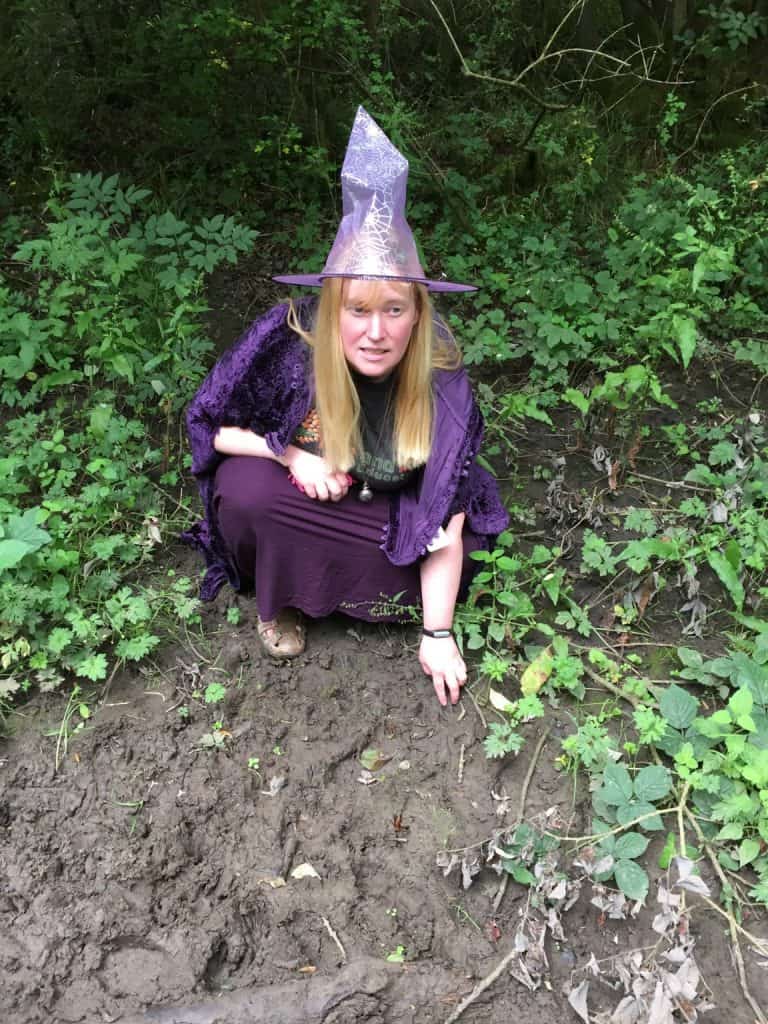 Joanna spotted some animal tracks in the mud. 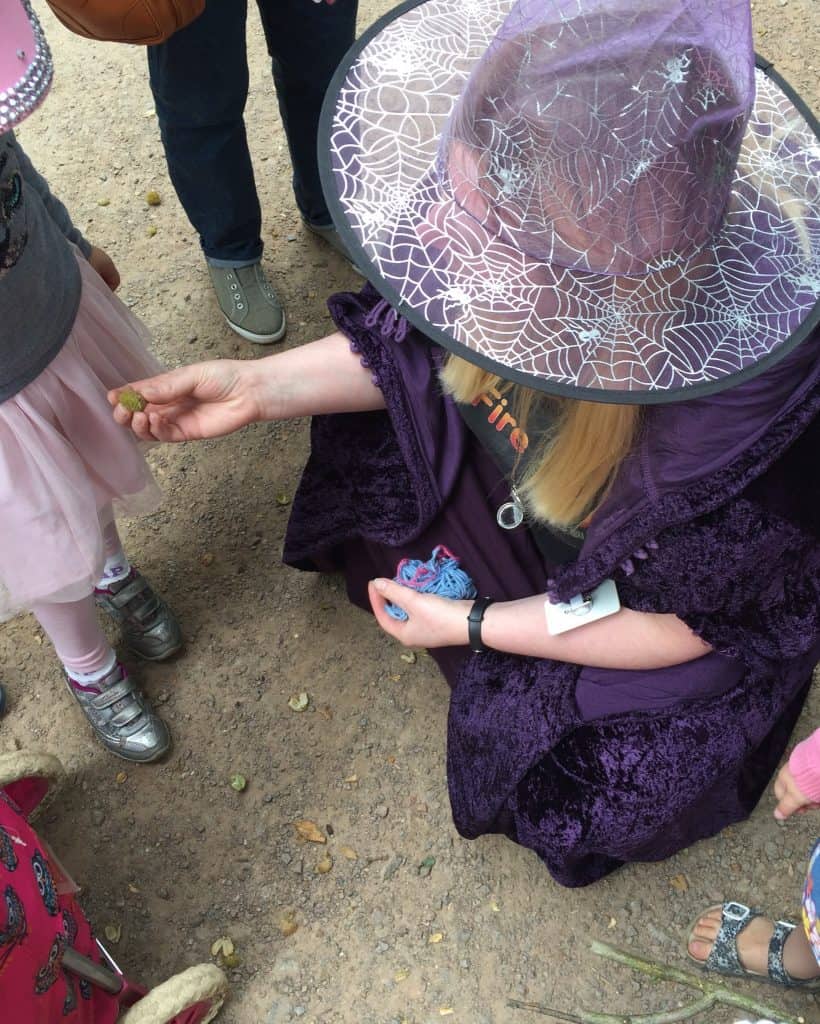 Joanna spotted an animal dropping and the remains of a nut that had been eaten by a squirrel.

Some of the older kids were in their element, and absolutely loved finding the bits and bobs. My girls weren’t quite so keen, I think they found it a bit harder to spot things as they are younger. Thea mainly just gathered more sticks, but Ava eventually found a few bits, and I managed to tie them on with wool. 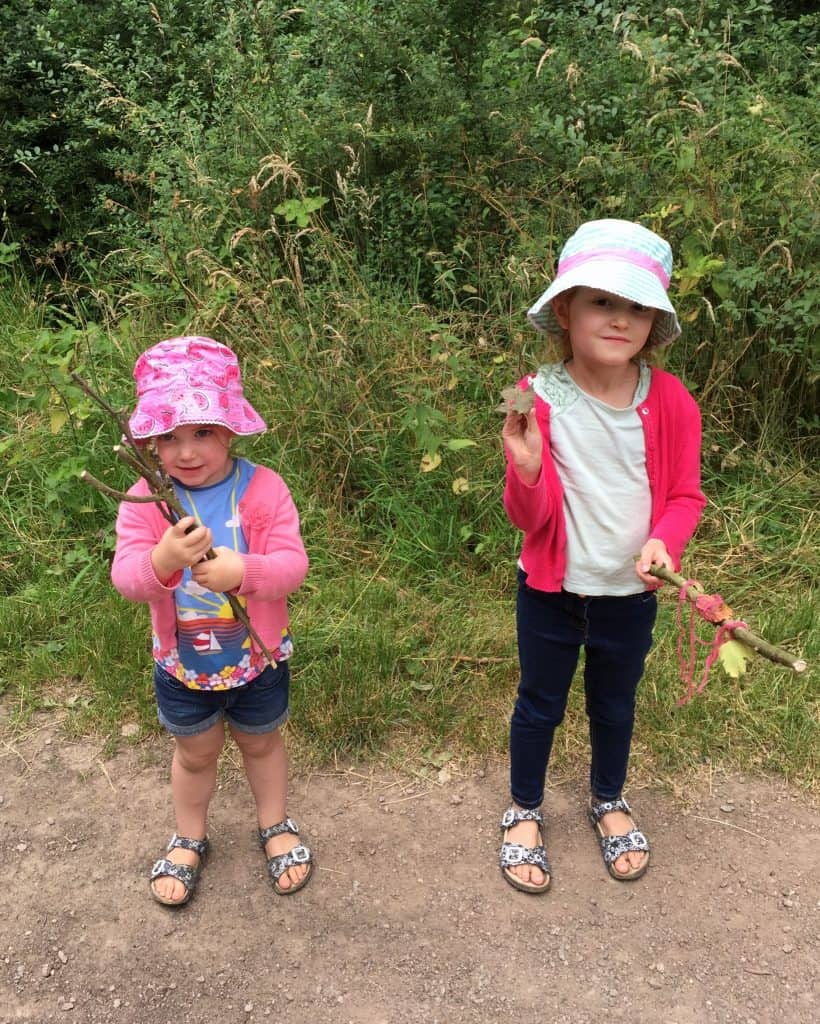 Now you see here that I for some reason thought sandals would be a good idea. It was a warm day, but obviously trainers or boots would have been much better. The kids do scramble around in the forest, and don’t just stick to the paths, so next time I’ll put them in wellies.

TESTING THE SENSES AT SALCEY FOREST

Next, we went into a forest clearing and the kids had to find bits and pieces that had been previously hidden in the clearing, they were all to do with the Gruffalo, which was exciting for the girls as they love all things Gruffalo.

Then it was time for the kids to pair up, and one of the kids wore a blindfold, whilst the other led them to a tree to feel the bark. Then they were spun round and had to try and find the same tree. The girls loved this, and were so cute leading each other around. 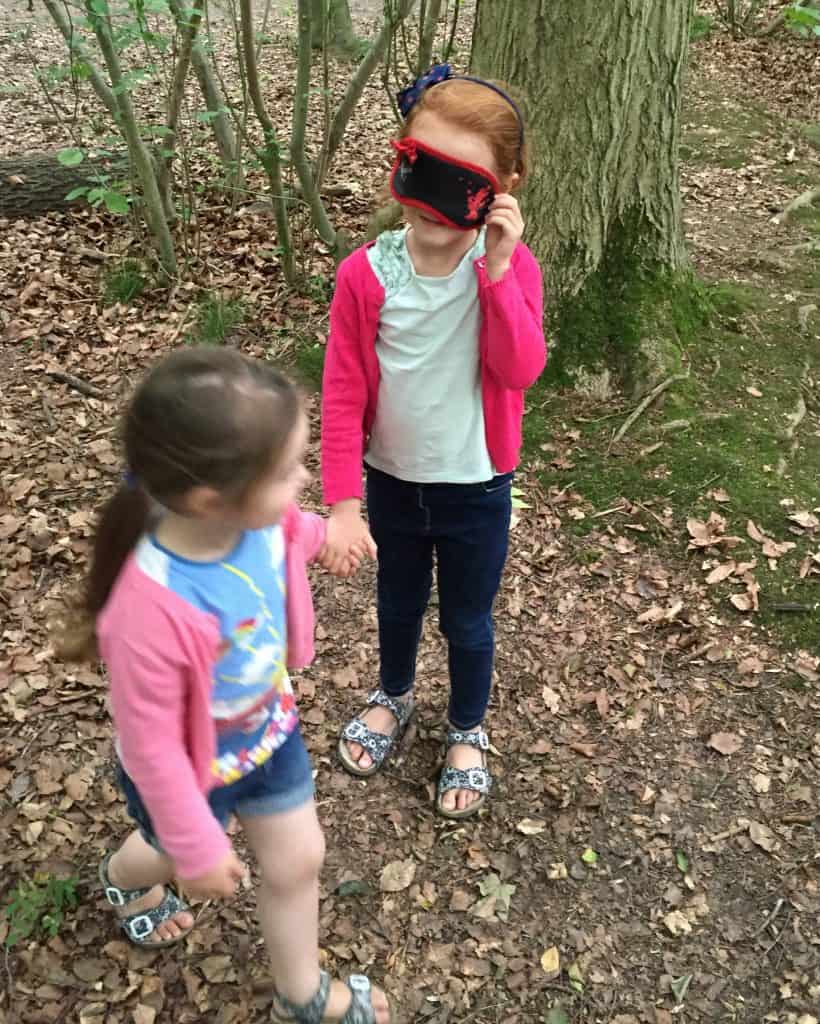 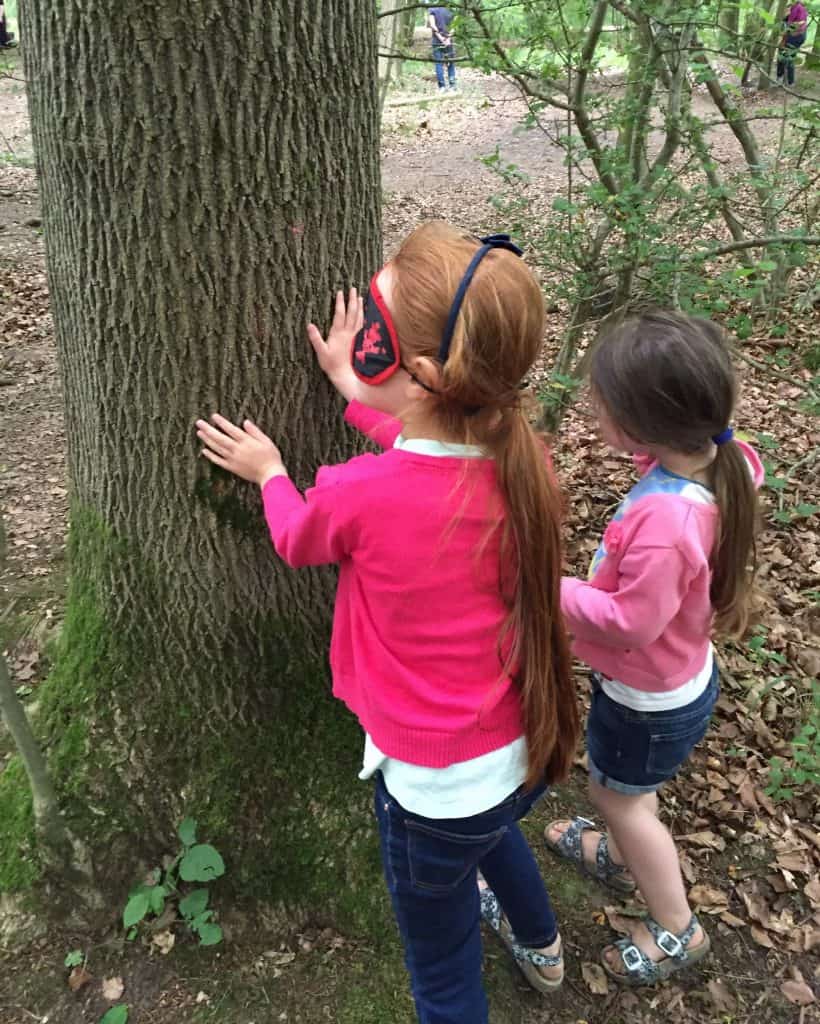 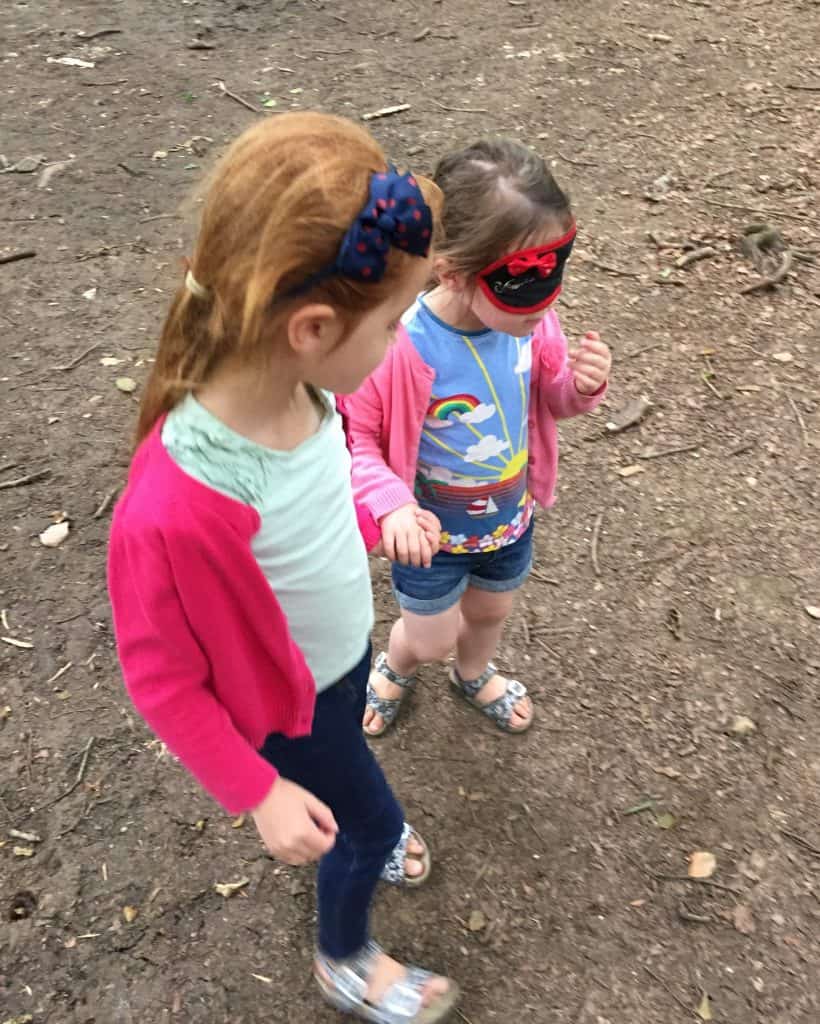 After the sense of touch, they tested their sense of smell, with an activity with scented material. Then came a bit of mud painting on trees, which the girls absolutely loved. 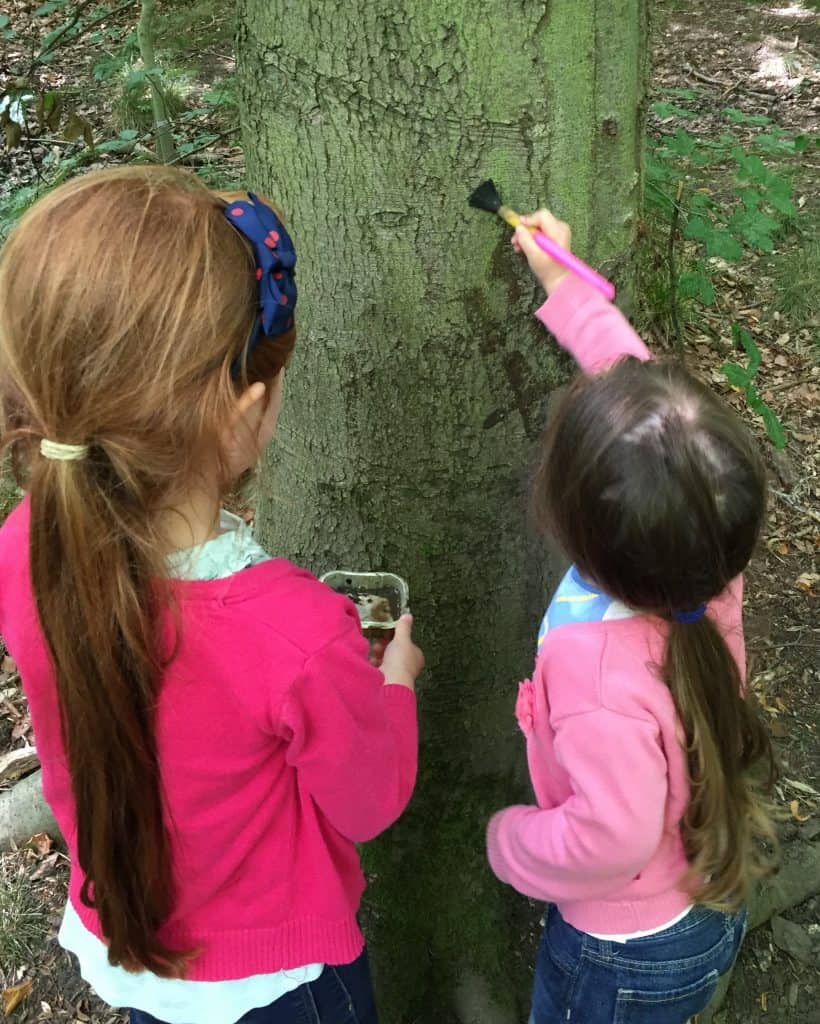 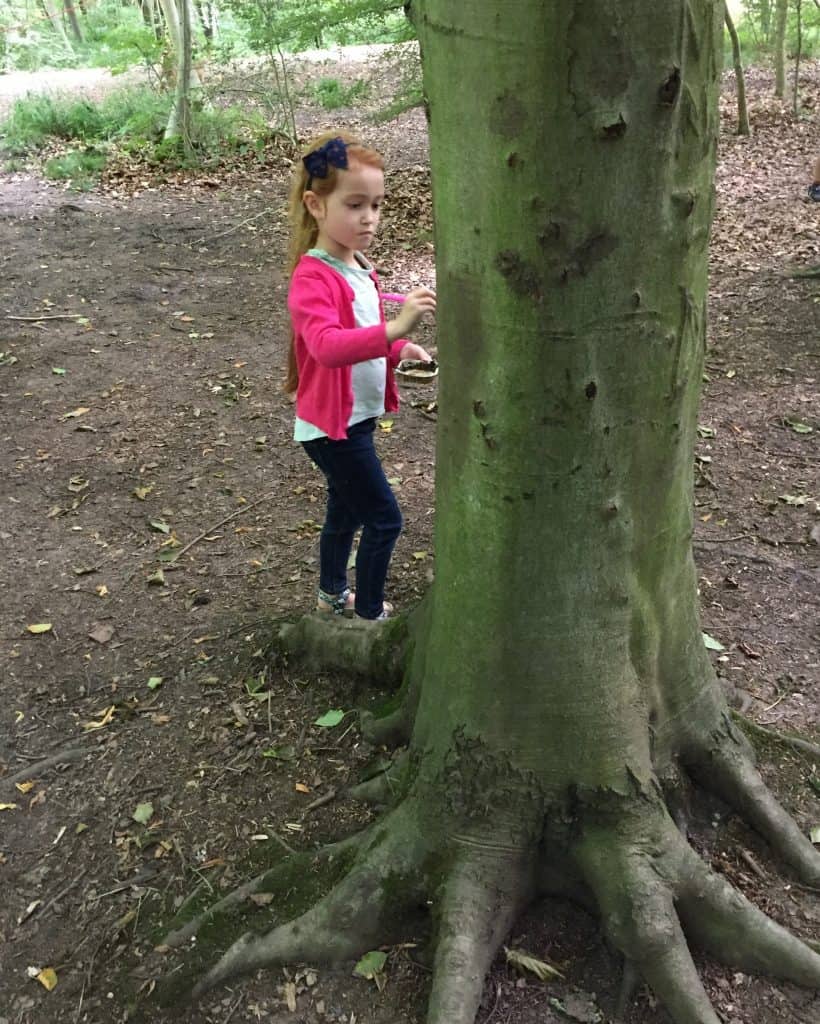 Finally, the kids could make necklaces out of slices of branch with runes on them. 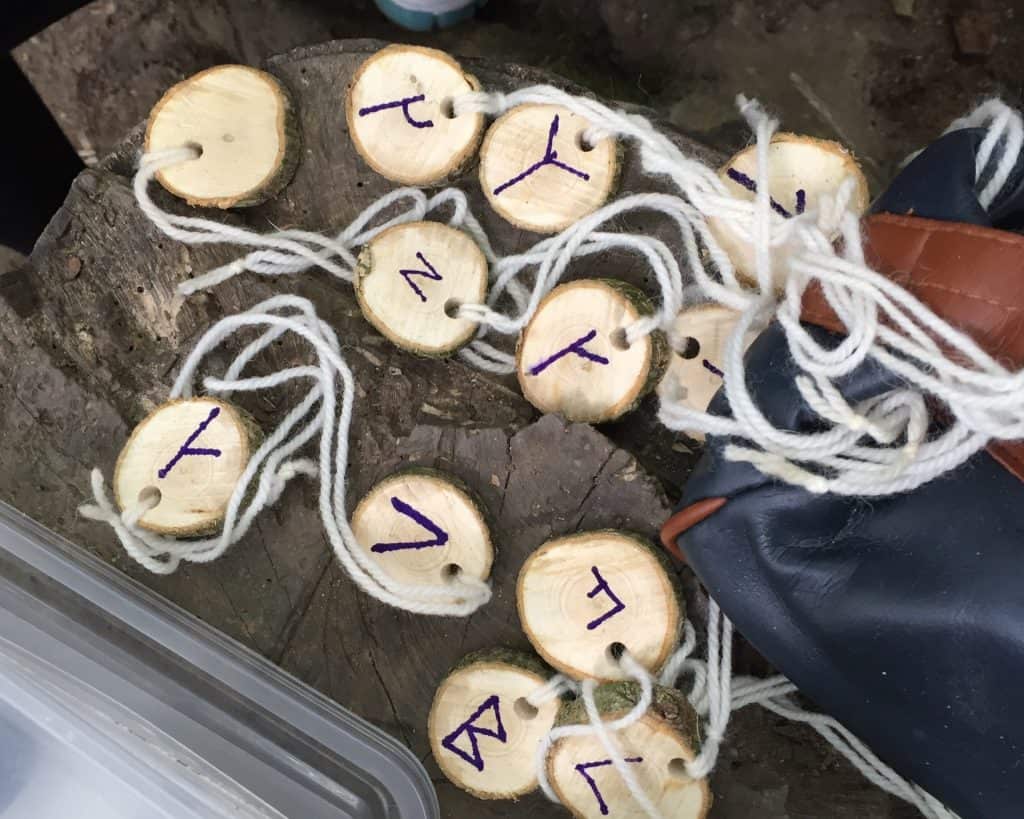 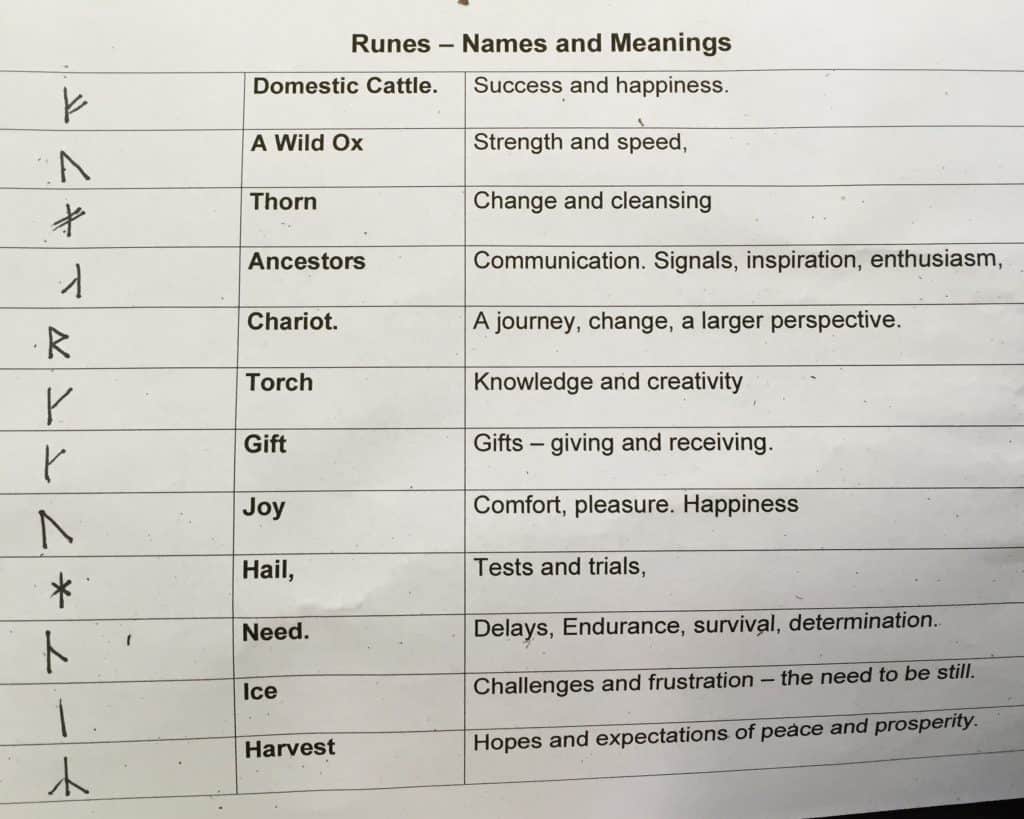 The session lasted about two hours, and costs £5 per child and £1.50 per adult. This session is aimed at kids who are six to twelve years old, so Ava definitely got more from it as she is five and a half, than three year old Thea. But she did really enjoy it as well. They also do a session for children three to eight, so we will go to that one next time, as I think it will be more appropriate for their age. There is also a session for eight to twelve year olds. You can book the sessions online and they run over the summer holidays until the end of August.

Joanna is a really engaging and knowledgeable teacher, and the kids all responded really well to her and got a lot out of the session, even the little ones. She also runs sessions on some Saturdays so I will hopefully book onto one of them too.

There is a nice little cafe and some new toilets at Salcey Forest, as well as a nice adventure playground and several walks suitable for different leg lengths. The highlight for us is the Elephant Walk, where you can walk above the trees!