Are you finding Christmas extra stressful this year? I don’t know why, but I am really struggling, and I feel like I’m drowning in a sea of unwritten Christmas cards, half-finished to do lists and weird dreams of unfinished work interspersed through mainly sleepless nights. Normally I love everything about Christmas. I love planning and buying gifts, I love doing Christmas crafts, I love choosing and decorating the tree. But I have come to the conclusion that I am a Christmas-zilla.

This picture is my idea of a perfect Christmas. 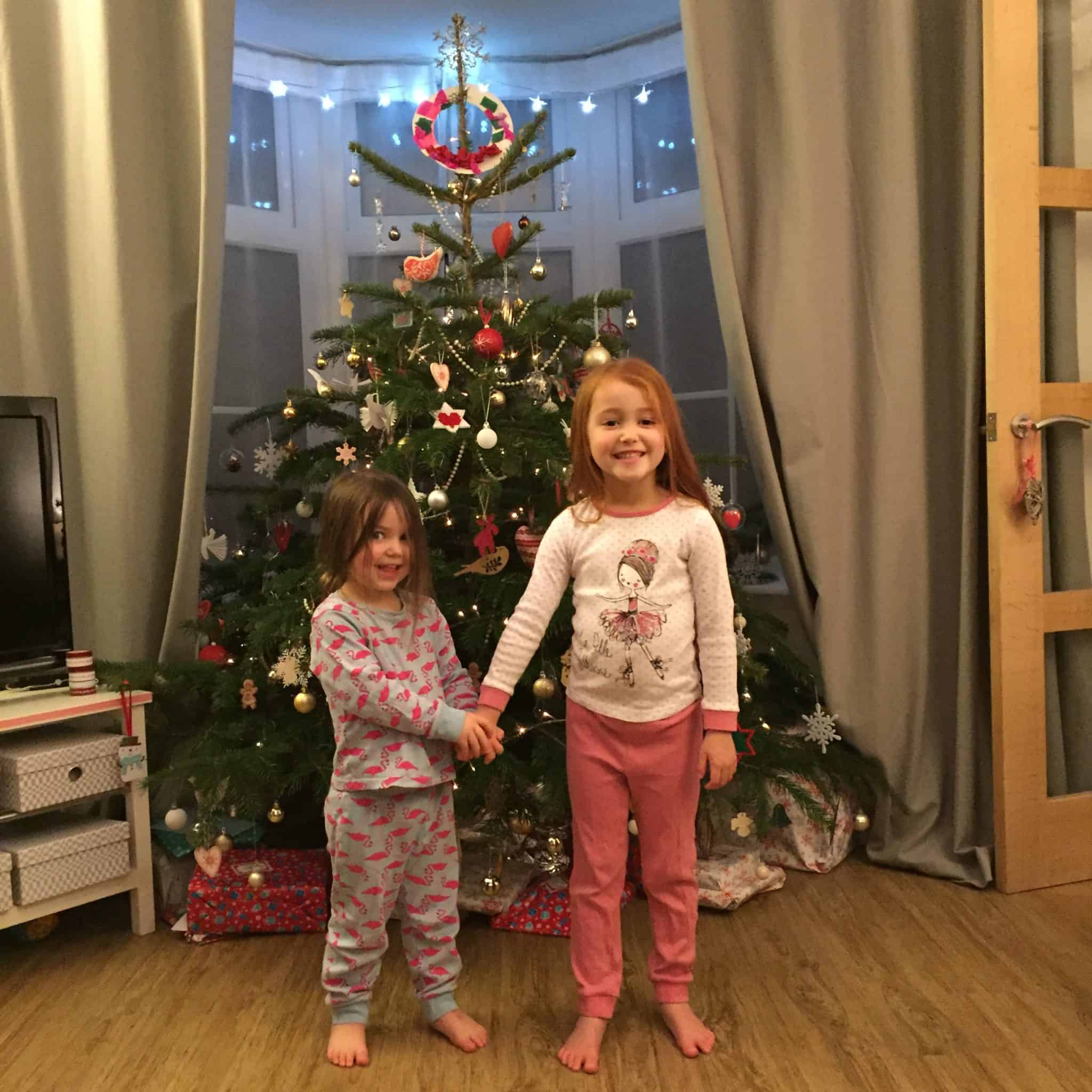 I just took this, and it I think it looks great, but it’s taken a good couple of weeks and a LOT of stress to get to this point!

This year, I feel like everything I planned has gone wrong, mainly due to lack of time. It started off well, with a visit to Father Christmas that the girls loved. But I feel like it’s all gone a bit downhill from then! I can feel the tension rising up through my shoulders, and have been on the verge of a migraine several times over the past week. I blame Pinterest. Such high levels of perfection can only be achieved by people who have loads of money and time. And perhaps a nanny, or grown up or no children. It can only lead to inflated expectations. But still, I really want the perfect Christmas (whatever that is!).

Last year, we went to a wonderful local Christmas tree farm, and tramped about in the cold looking for the perfect tree. I was really looking forward to doing it again this year, but as usual, I had planned too much in too little time. We had arranged to go to my parents’ house so the girls and cousin Bonnie could help decorate their tree. But time slipped away and we knew we’d be really late if we went to the Christmas tree farm. It was also raining and really windy.

Cue meltdown. From me. The girls were so confused about why I was crying, and kept saying “Please be happy mummy” and hugging me. Ryan took over and said he’d go and get a tree whilst I took the girls to my parents. I was so gutted to miss out on the experience, but I knew that I would be stressed, and the girls would not enjoy it as they would be cold and miserable. I didn’t want to get a tree from one of the big chains, as we always like to support local growers, but I thought that’s what we’d have to go for. But luckily Ryan found a great tree at the green grocers on our high street, and, even better, it was his last one so he gave us money off. Ryan was especially pleased about that!

The girls had a great time at Grandma and Grandpa’s, and Ava only asked about going to pick the tree once, and luckily didn’t make a fuss when I explained why. 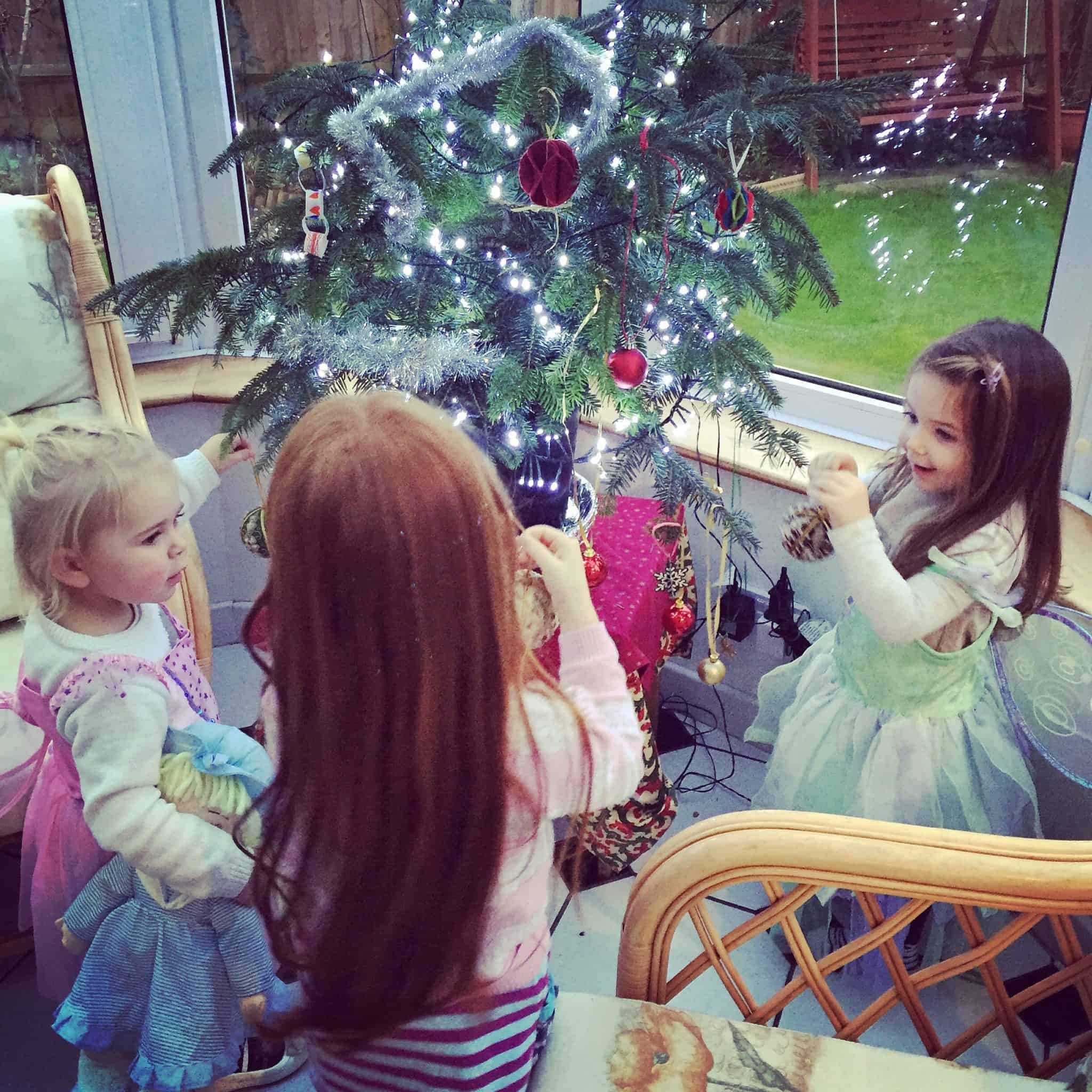 Bonnie, Ava and Thea had a wonderful time decorating my parents’ tree. It needed a *little* bit of adjusting when we had gone home…

Then it came to decorating our tree. My friend had shown me a beautiful time lapse video of her family decorating their tree, and I really wanted to try and make one too. Here it is.

I did edit out the final second as when I bent down I had a builder’s bum. Not quite what I had in mind.

Next, Ryan knelt on a bauble. Fortunately he didn’t cut himself.

Minutes later, Thea dropped the glass snow globe my mum got for Ava a year or two ago. 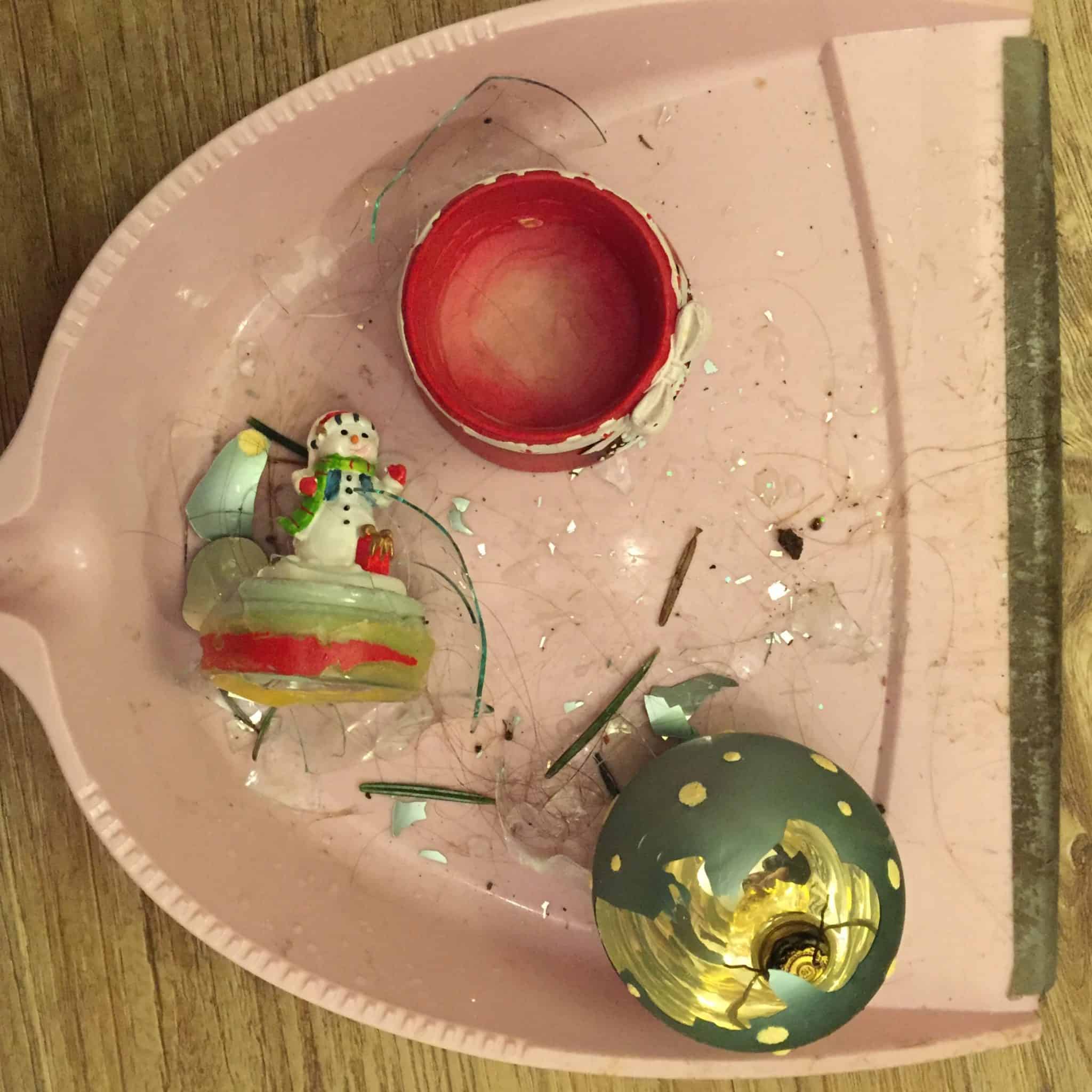 I feel like this smashed bauble and snow globe sums up our Christmas so far!

I don’t know if you’ve ever dropped a snow globe on a hard floor. Well I don’t advise it. It shattered and tiny shards of glass flew everywhere, along with goopy liquid covered in glitter and ‘snow’. I can’t even believe how far the pieces went. It was panic stations because we weren’t wearing shoes and were worried about getting cut, and then it was the question of how to clear the blessed thing up!

After that, we gave up for the day. I don’t know how anyone stays sane trying to decorate a tree with small children.

The next day, we did managed to get the time lapse video. (This time we secured the phone with blu tack, we are such professionals.) Sadly there was still a but of builder’s bummage. Sorry about that.


The tree looks lovely, now that I have rearranged some of the decorations Thea put up. Her method is to hang them all on the same branch. 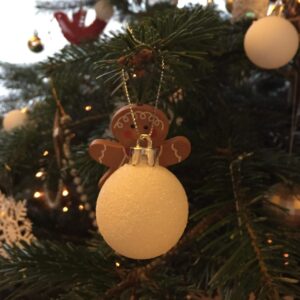 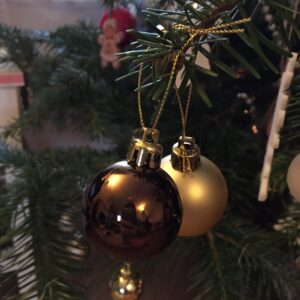 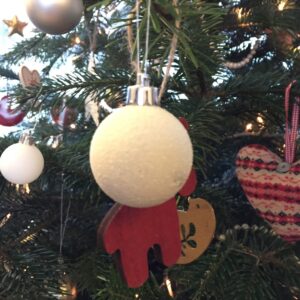 We had Ava’s Nativity play, and her school Christmas Carol Service, which were both wonderful, although Thea got a bit out of control at the service. She really needed a nap and the only way I could keep her quiet was giving her the Party Rings I had snatched up on the way out of the door for emergency use. Then the sugar kicked in. One of her best friends was sitting with us, and the pair of them spent most of the service making a fort out of the kneelers, and giggling together. I don’t think anyone minded, fortunately! 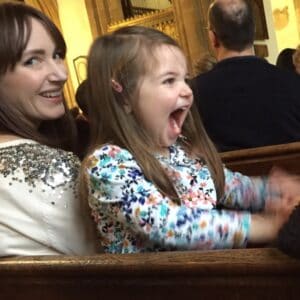 Making a racket… in church. 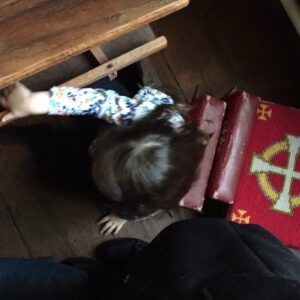 Ava spend half of it with her hood over her face, or pleading to sit with us. 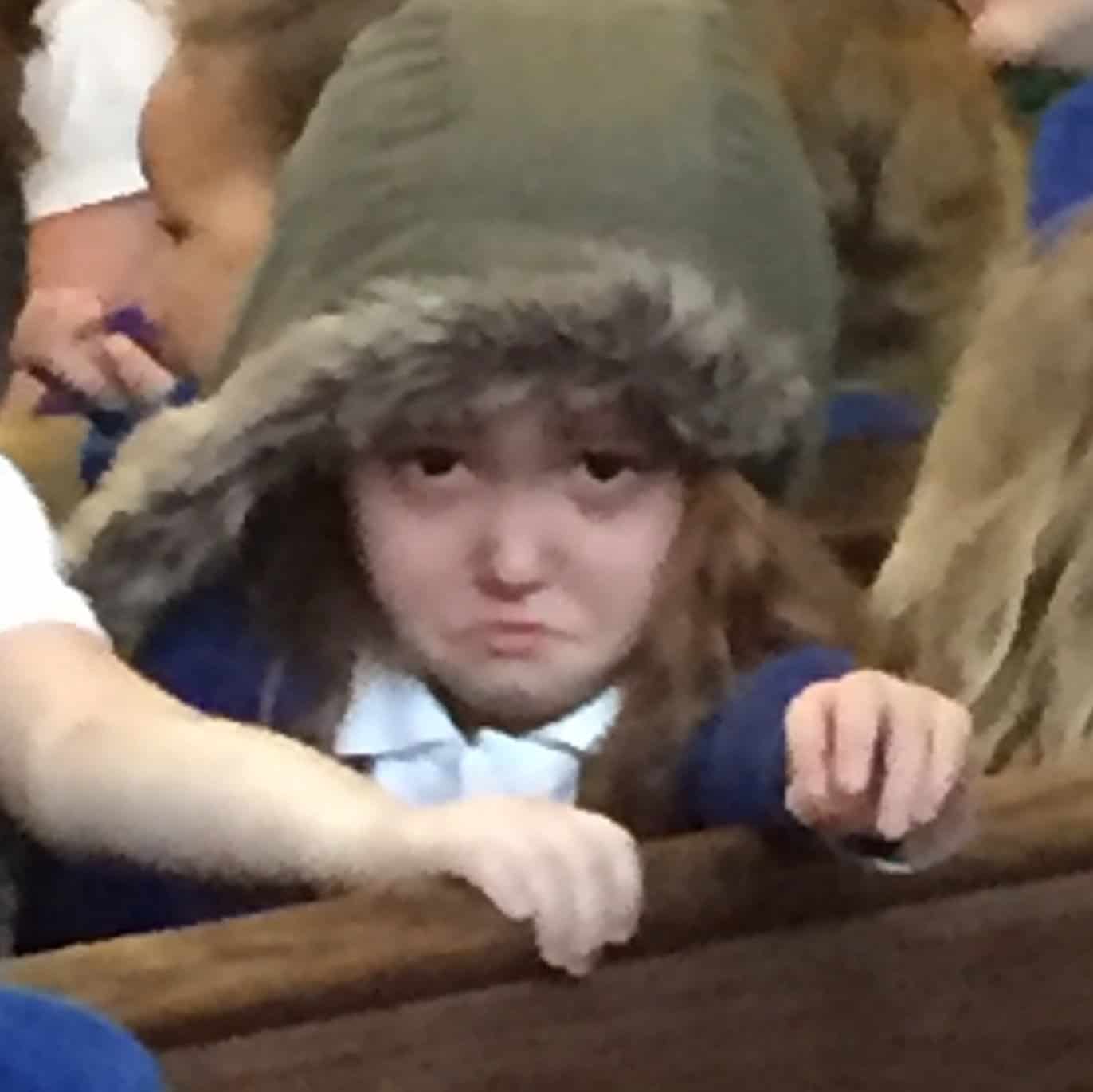 It turns out she’d spotted the biscuits and wanted her share!

I managed to get most of the Christmas cards in the post on time but haven’t done any local ones. Ava wrote most of hers at half term, though by the time it came to take them to school, I couldn’t decipher all of the names… 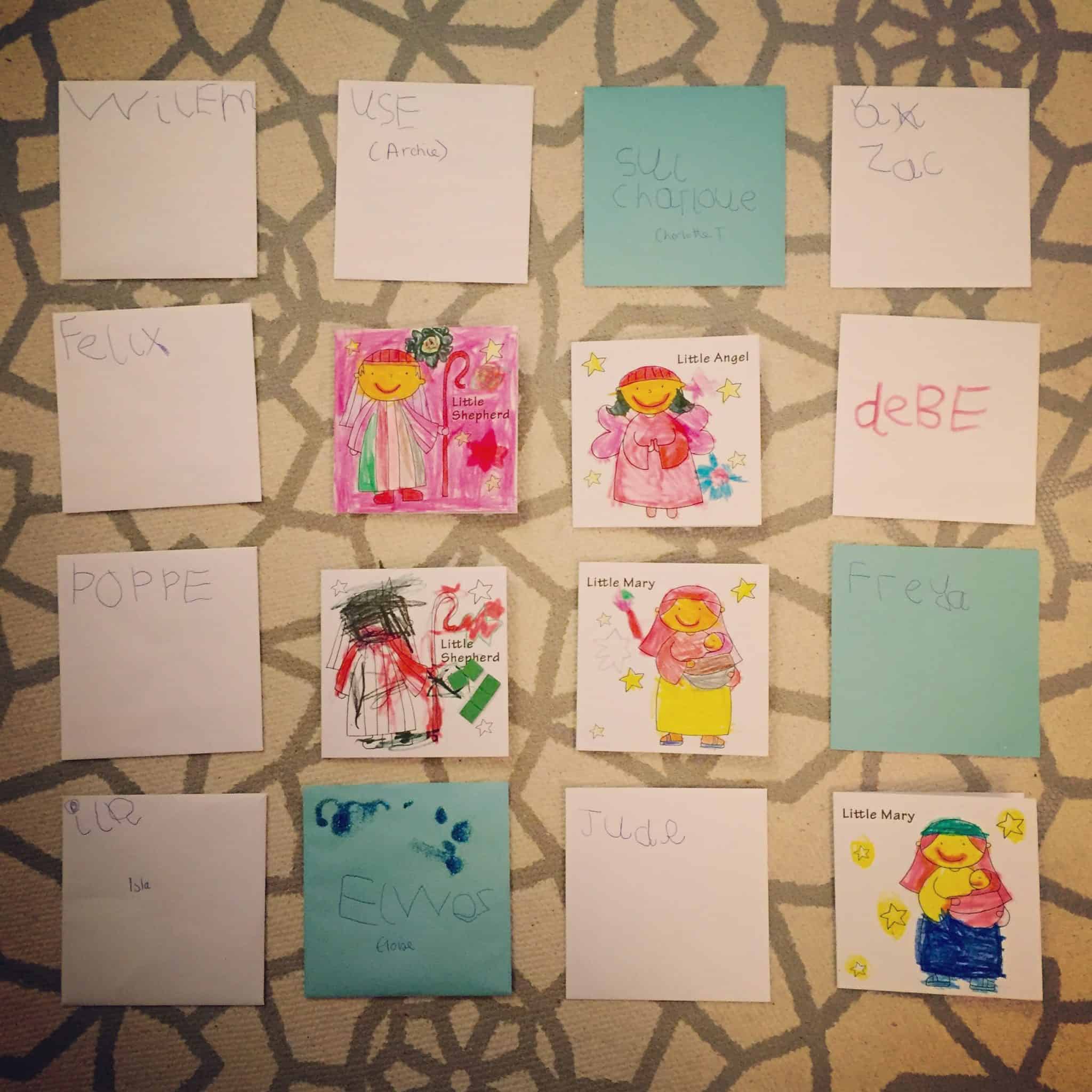 Ava did all the writing and most of the colouring… but can you guess which one Thea did?!

It was Ava’s 5th birthday last week, so along with Christmas prep, we also wanted to make sure her birthday was special, and not overshadowed. I think we managed it, but then had added stress when she kept asking for a party, which we hadn’t planned on doing. Last year we hired a hall and clubbed together with two of her best friends and did a big Frozen party. So it turns out she was expecting something on that scale. In the end it was a mad dash texting round a few school friends’ mums, hoping they could make it the weekend before Christmas. We kept it fairly simple, with six little lovelies plus Ava and Thea at our house, and they all seemed to have fun!

After that we went to a great carol service, which had the added bonus of hot dogs and hot chocolate afterwards, which the girls loved. It was so lovely to sit down and have a chance to think about the real meaning of Christmas for a little while! It made me realise I am being an idiot. Instead of creating the ‘perfect’ Christmas, I am just being a stress monster who is shouting. A lot.

I’ve scaled back the Christmas crafts. I really wanted to make a gingerbread house for the girls to decorate. But in my current state of mind, I know that would end in tears. Probably all of us! So instead we invited some friends around and made a very fun, sticky mess decorating some IKEA biscuits and tree. Nobody cried. It was lovely. And just what I needed. 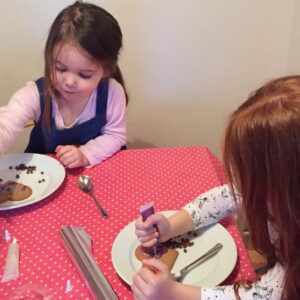 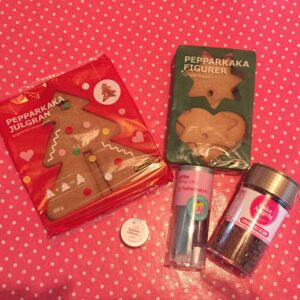 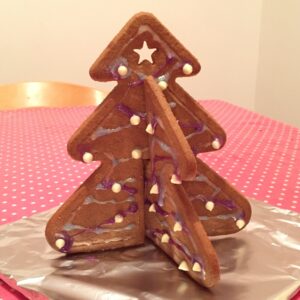 I have managed to do a few other mini crafts, which I may, or may not get around to blogging. It’s not what I had planned. But I’m slowly coming to terms with it!

I know that this is such a first world problem, and pales into insignificance when you think about the refugee crisis. But I’m hoping that some of you might feel better knowing that I am feeling totally out of control!

So is it just me, or are you finding it much more stressful this year? I don’t know if I have just blocked out the drama from previous years, and it’s always like this. But I really don’t ever remember feeling this stressed.

So if you don’t see any more blog posts for a while, I’m sorry but I am either collapsed in a heap under a pile of unfinished Christmas cards, or on the sofa with a glass of Bailey’s. Hopefully the latter! Merry Christmas!