I recently wrote about Thea’s birthday party, and promised you a tutorial on her Ariel doll Little Mermaid cake. My mum used to make me a Flower Fairy cake every year, where the cake was made in a pudding bowl, turned upside down and made into the Flower Fairy’s skirt. I loved them so much, and knew Thea would too.

Here she is in all her finished glory – I have to say I was very relieved she turned out as well as she did!

It was actually fairly simple to put together, but it was quite time consuming; I’d recommend baking the cake the night before it’s needed and constructing it and decorating it on the day of the party. I did it all in the morning and it was pretty stressful!

Start by making a four egg sponge cake. I made vanilla flavour but you could make chocolate too, by adding about 50g/2oz cocoa to the flour, and leaving out the vanilla extract.

Ingredients for A Little Mermaid Cake

1. Cream together the butter/margarine and sugar until pale and fluffy. I used an electric whisk.
2. Gradually whisk in the eggs and vanilla extract. I also added some pink food colouring at this point.
3. Sift in the flour and baking powder and gently fold together.
4. Pour half into a greased, lined pudding basin, and the rest evenly into two greased, lined 7 inch cake tins.

I  didn’t use enough pink food colouring, so you couldn’t see it once it was cooked, next time I’ll make it much darker. 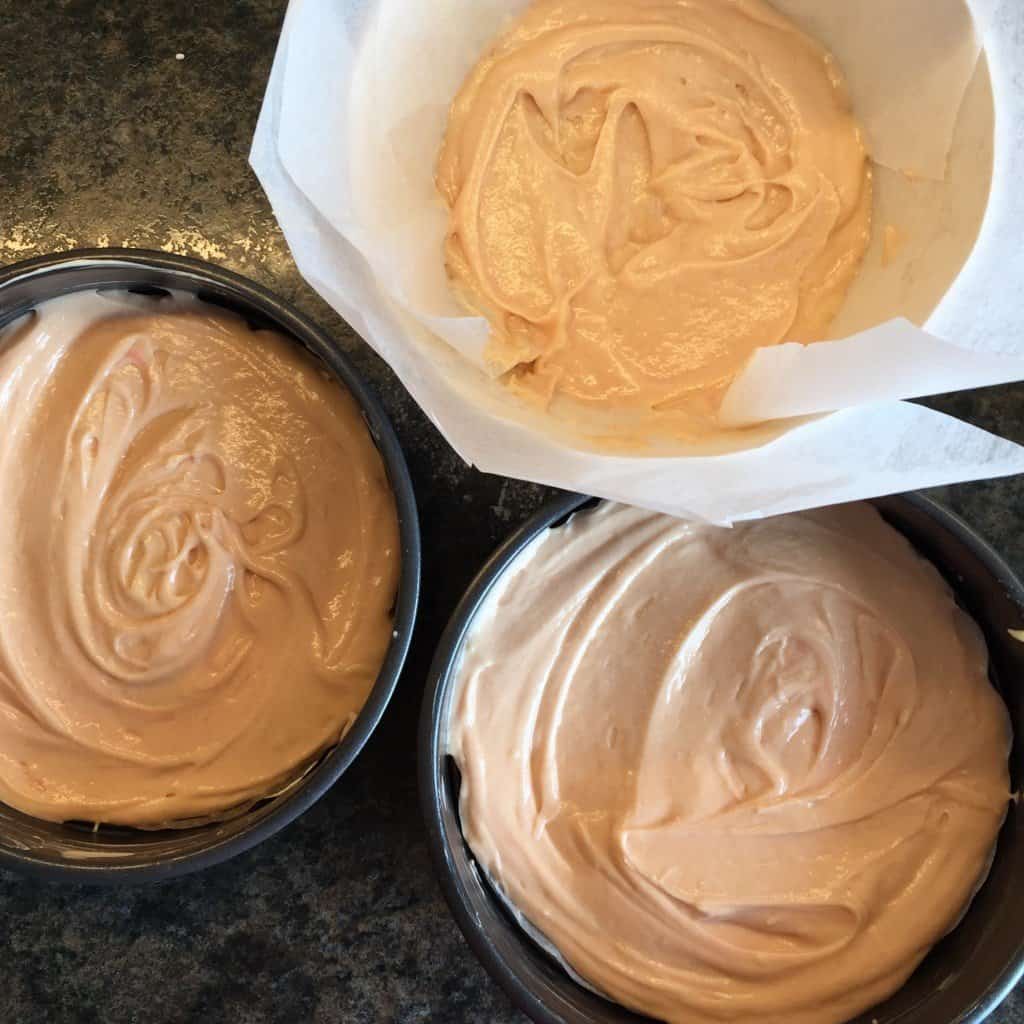 Bake at 180 degrees for about 20 minutes, until the normal cakes are cooked, and leave the pudding bowl cake in for another 15 minutes or so, but keep an eye on it, as all ovens are different. 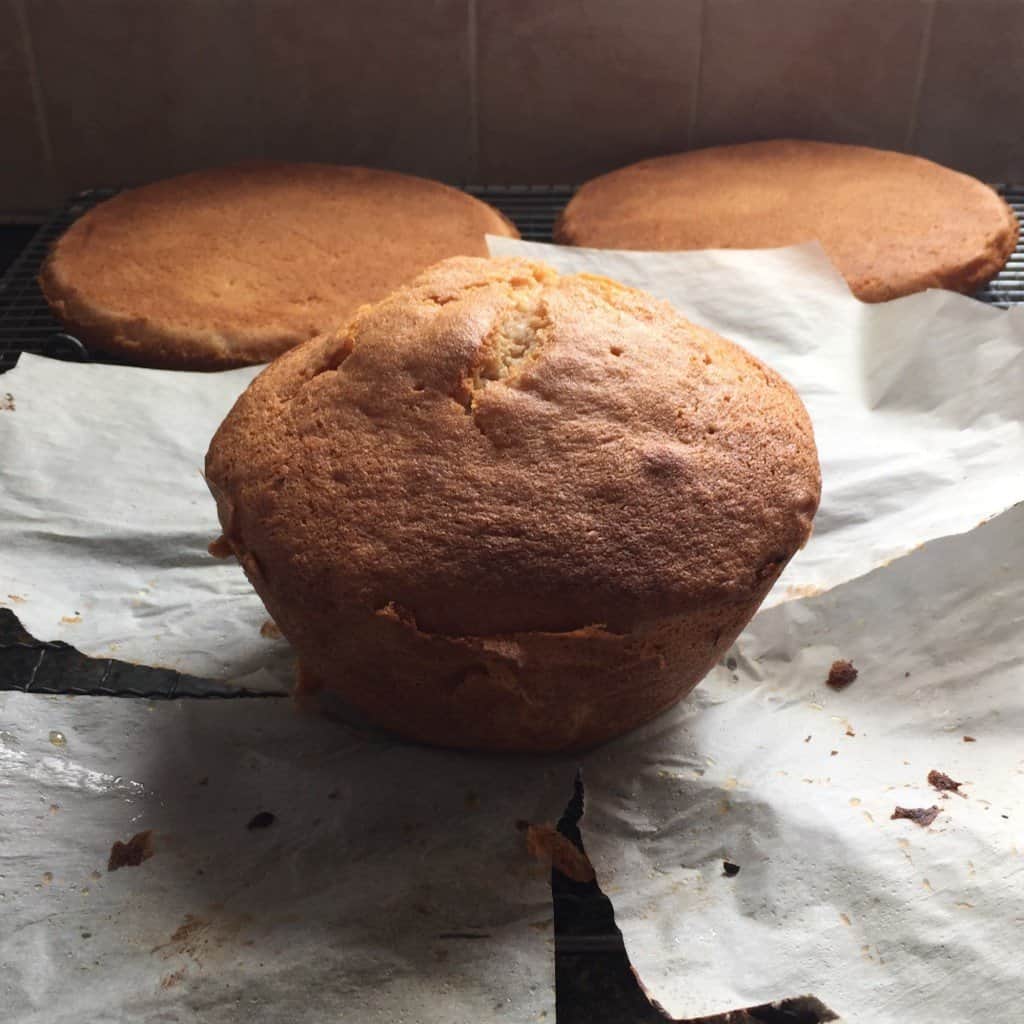 The normal cakes didn’t rise as much as I’d have liked (but my oven is rubbish so I’ll put it down to that!)

Whilst the cake was baking, I wrapped Ariel’s head and legs in clingfilm to protect them from the cake and icing. I also made a little bodice out of some old material so that her top would match the skirt, which would be pink. I just stuck it on with sellotape.

Remove the cakes from the tins and pudding bowl and allow to cool completely. You can cut the pudding bowl cake in half horizontally to help cool it down, as you can sandwich it back together with jam.

I stacked the cakes up to see if they’d be tall enough to go up to Ariel’s waist and it didn’t look good, but I realised I could trim off some of the second 7 inch cake, to make a smaller layer at the top, so I just about got away with it. 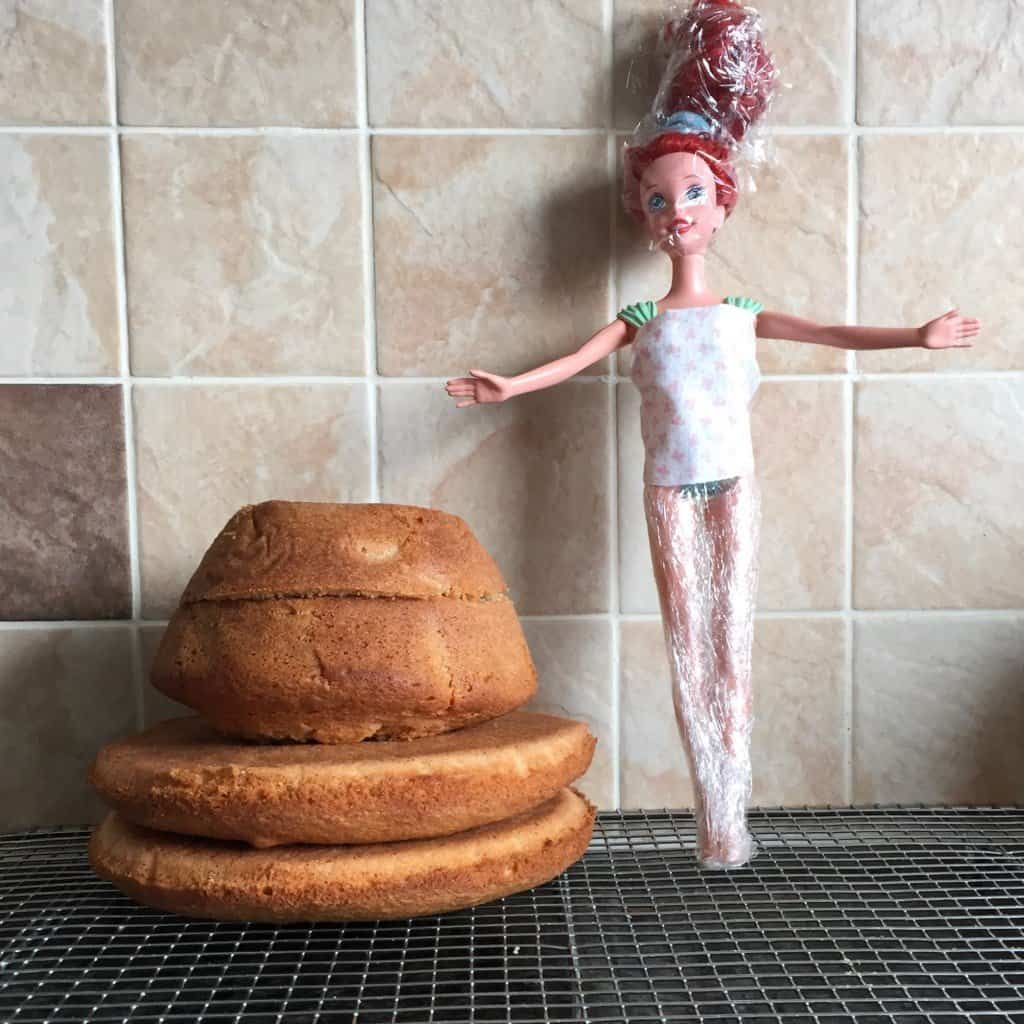 Cut a hole in each cake just big enough for Ariel’s legs to go through. It needs to be snug or it will be all wobbly. I also trimmed the edge off this cake so it would be slightly smaller than the bottom one, and I used the trimmings to make the final top layer. 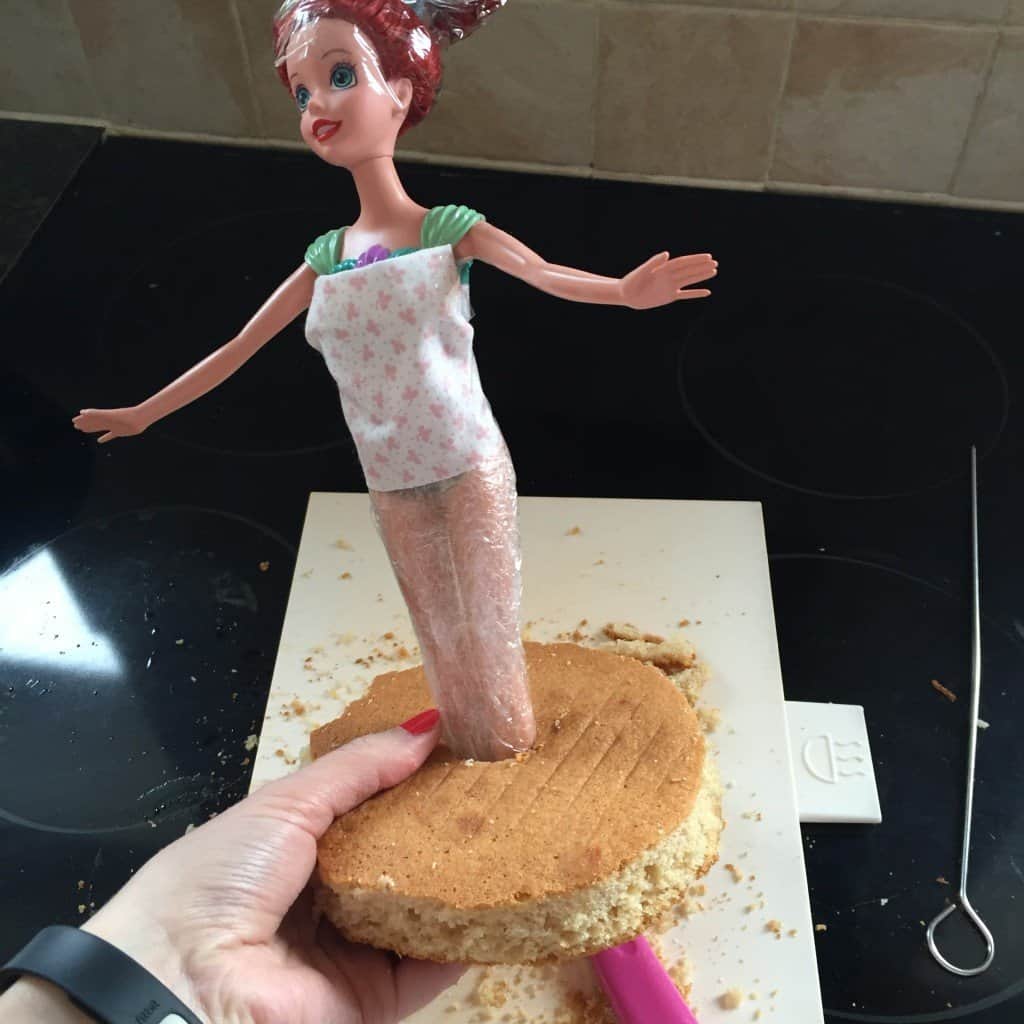 Spread jam or icing on your base plate and stack up the cakes, making sure the centre holes are aligned. Add a generous layer of jam or icing at each layer to stick it all together, (and because it will taste great too!) and put Ariel carefully into the cake.

How to Decorate the Little Mermaid Cake

You’ll need a LOT of butter icing. I flavoured mine with vanilla extract and added pink food colouring until I got the right sort of shade to match the little bodice I’d made. I didn’t follow a recipe for this, I just made what I thought would be enough…

Ice the cake, using a small spatula or butter knife, working from the top down – I had a feeling I wouldn’t have enough icing, so I did the front first and worked my way round to the back just in case I ran out.

I left the icing fairly rough, as I was going to stick decorations on it, but in an ideal world it would be lovely and smooth, and you could pipe decorations onto it! I just stuck some iced gems around the base as I thought they looked a bit like sea creatures, and then got some sparkly pink and purple sugar decorations from Sainsbury’s to press into the rest of the skirt. Take the clingfilm off Ariel’s head, add her tiara and move her arms down, and she’s done!

There is one snag with this cake… where do you put the candles? I used some leftover cake and we stuck on some cardboard cut outs of Sebastian and Flounder, and that did the trick. You could also cover a small potato with foil. 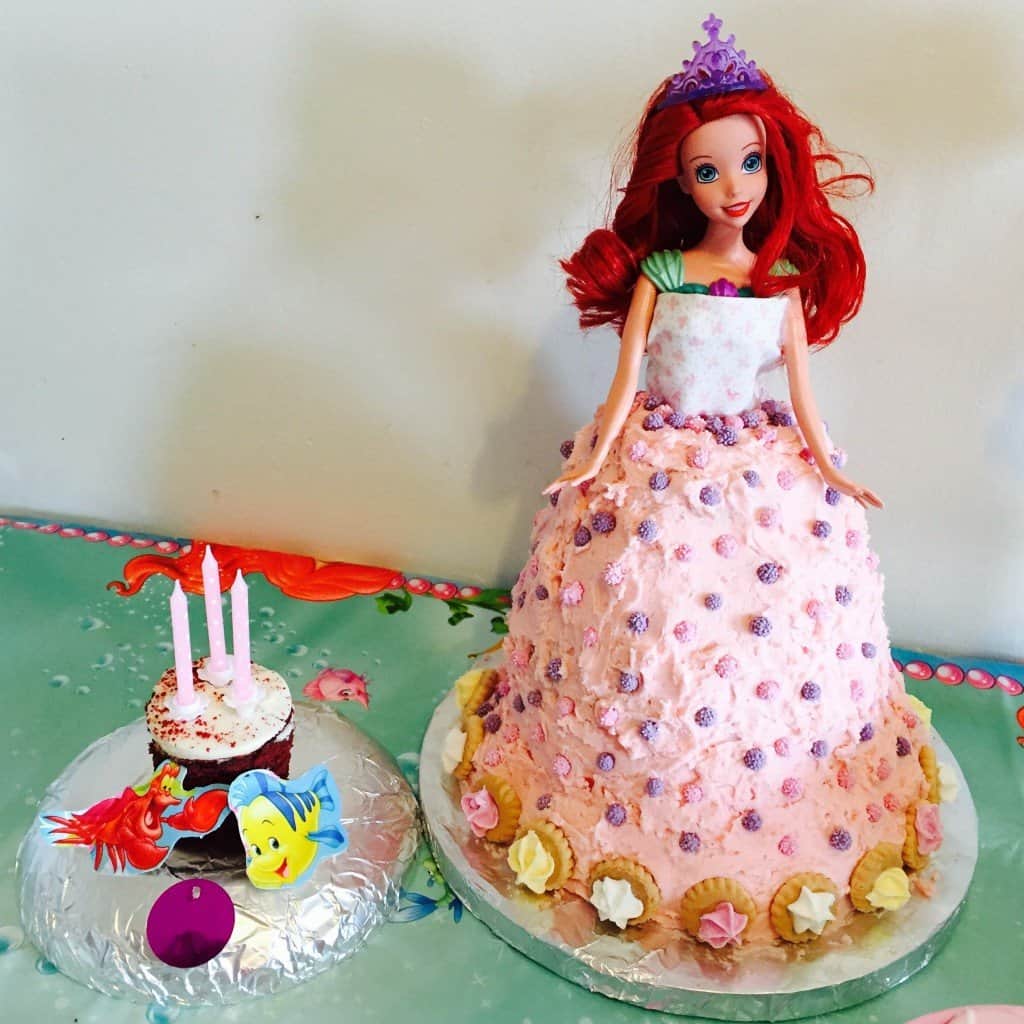 So what did the birthday girl think? Ava was most excited but Thea absolutely loved it too. 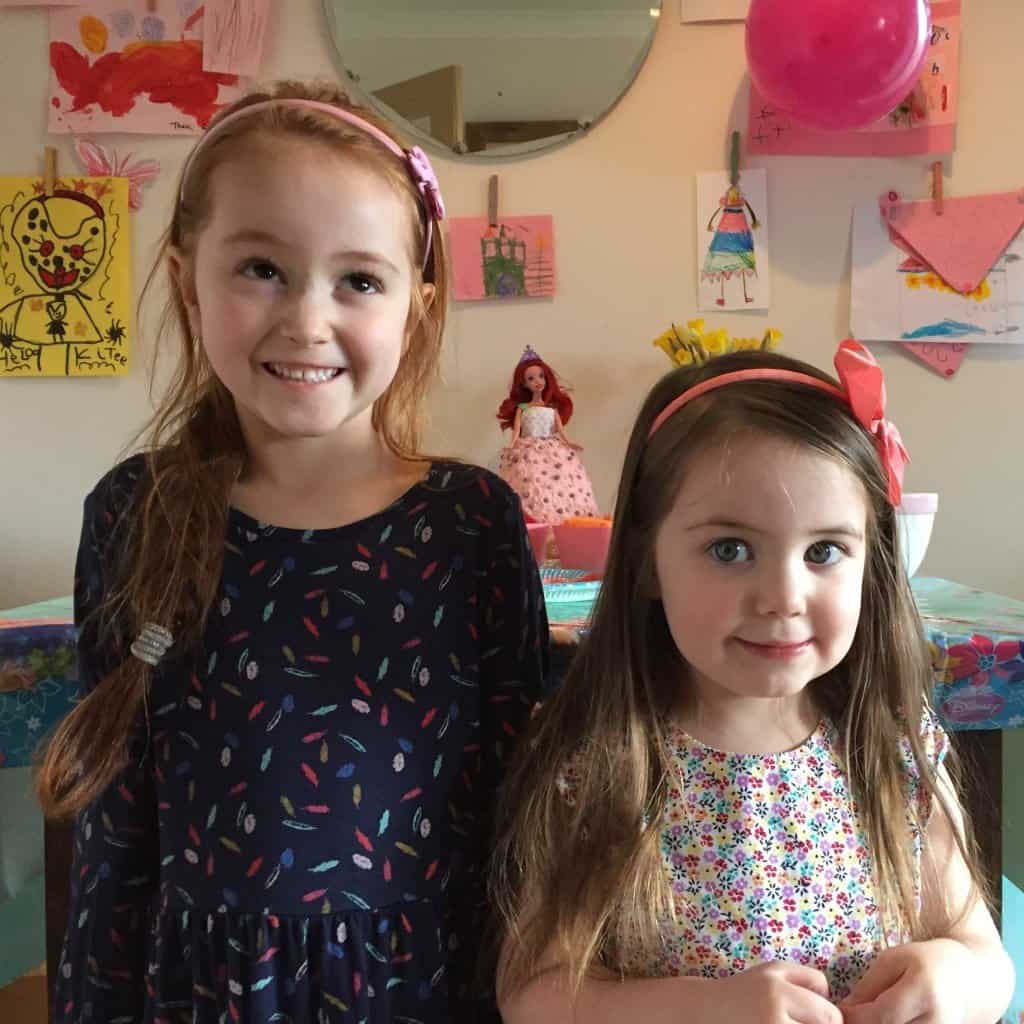 I was pretty gutted to have to cut into it, but it did taste nice. Why not pin this tutorial for later? 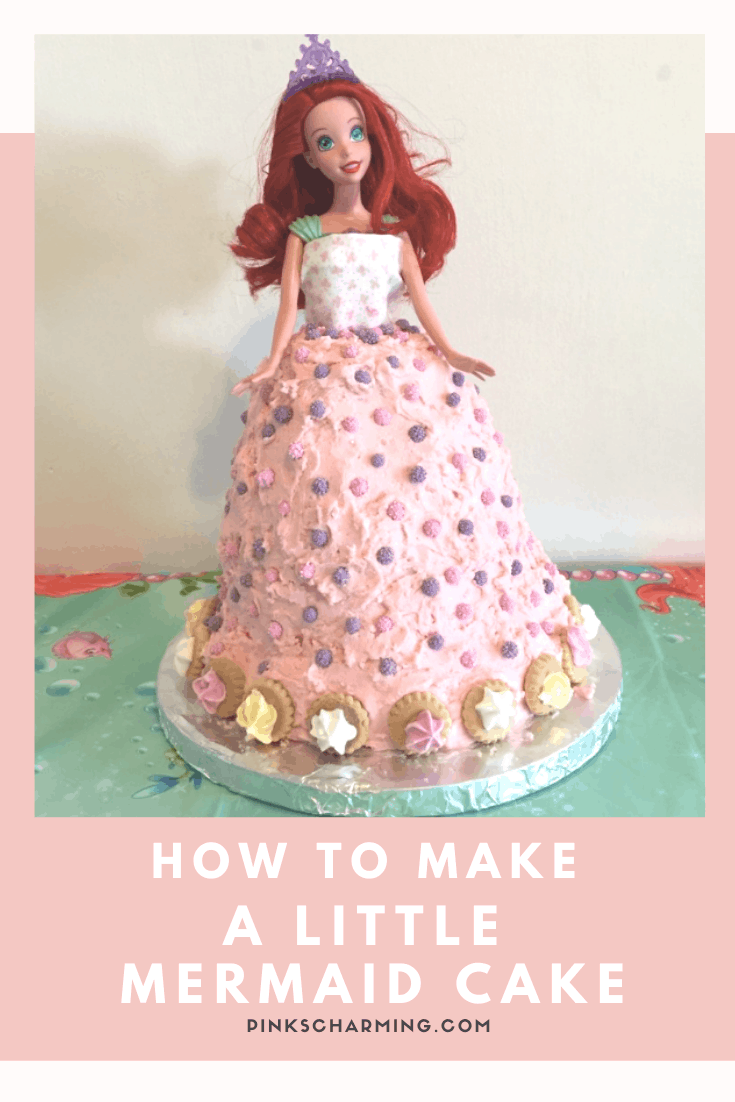 You might also like the step by step tutorial I wrote for a classic Harriet Hedgehog cake.

I’m linking up to: 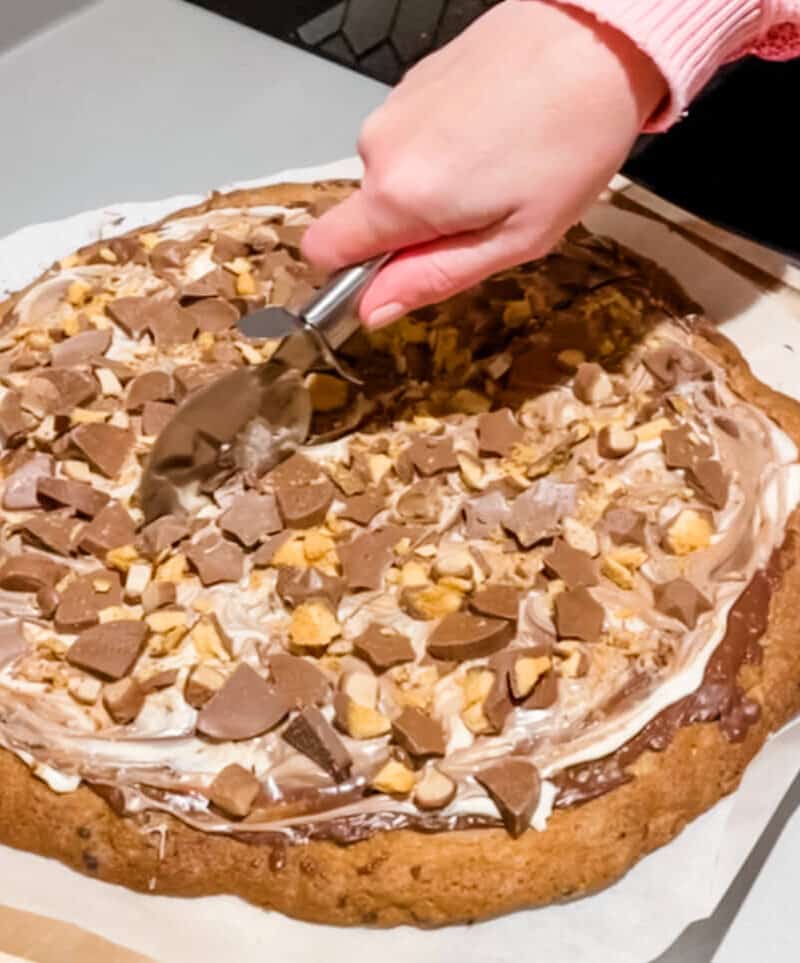 How To Make A Crowd-Pleasing Chocolate Pizza 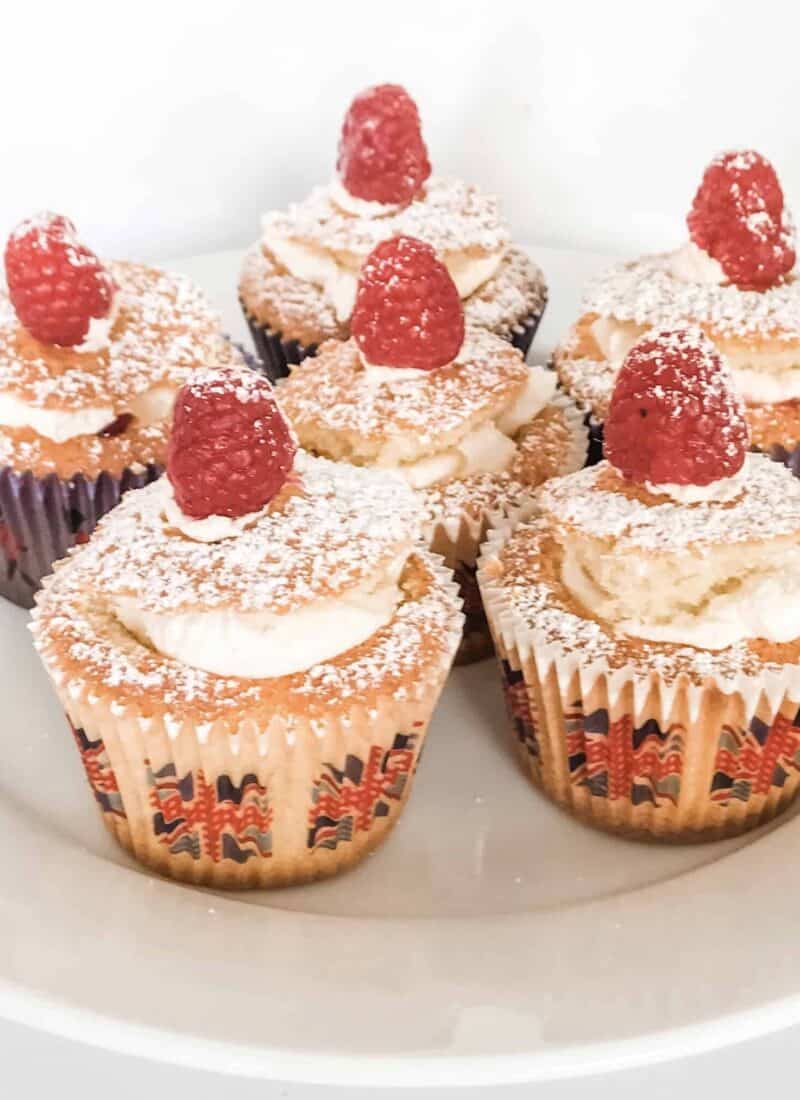 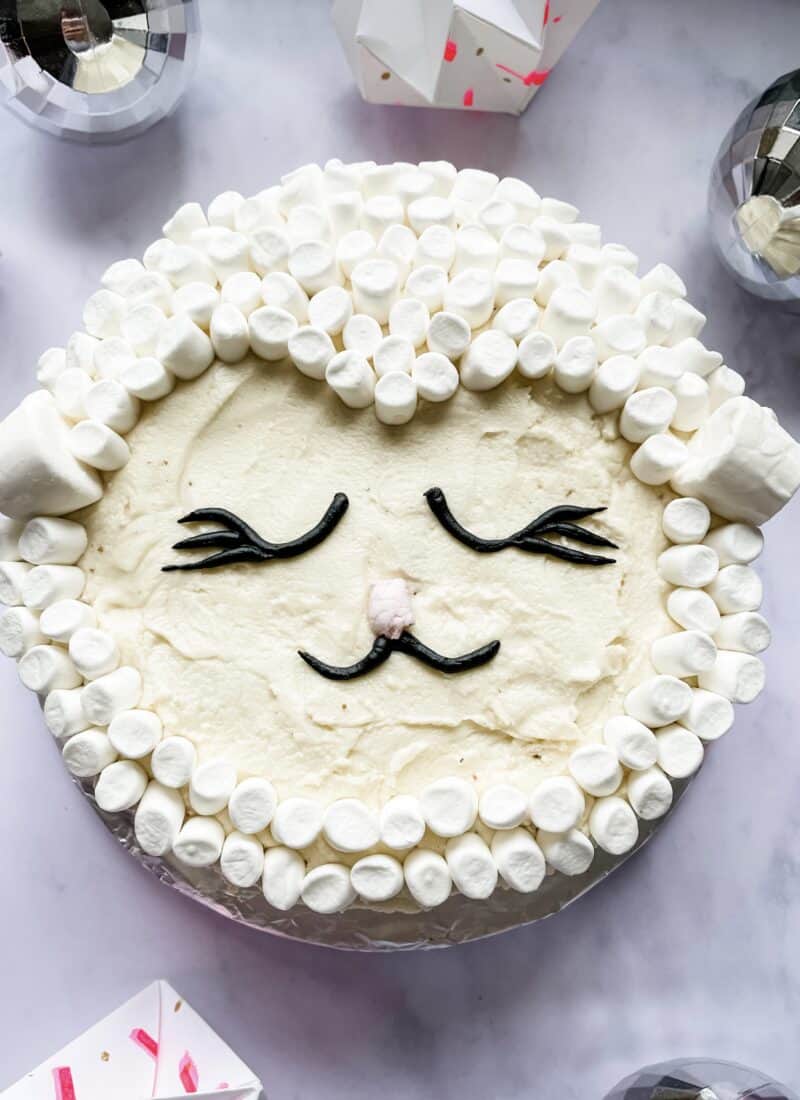 How To Make A Cute Lamb Cake
Next Post >

What Ava Did Next: Pirates, Ladybirds, and Balloons