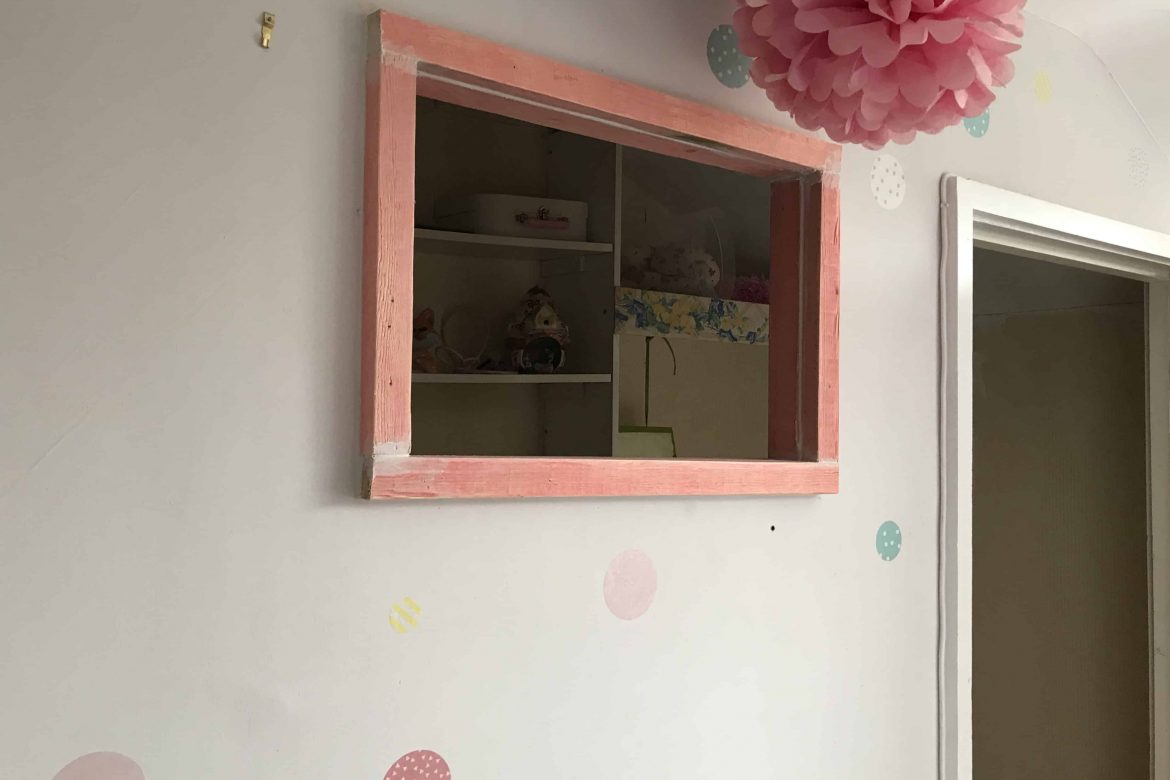 Making A Kid’s Den in the Cupboard Above Our Stairs

Our house is always evolving, and I don’t think it will ever actually be finished! We have begun a little new project, requested by our children, and as with everything house-related, it has escalated. We are making the girls a den in the cupboard above our stairs. I’m hoping to only use materials we already have in the house, to make it zero-cost and zero-waste. Here is the progress so far…

The den started life as a dingy, dark but large cupboard, which opens off the girls’ playroom. When we moved in five years ago, this cupboard became a loft substitute. It houses Christmas decorations, and all manner of other stuff. We recently had the loft boarded, so we could move the stuff up there and reclaim the space. Once the girls cottoned on to the the size of the cupboard, they knew exactly how we’d use the reclaimed space! They even emptied the cupboard for us!

Making a ‘Window’ in the Over-Stairs Cupboard

The cupboard luckily already has a (horrible) overhead light, but it’s still dark and dingy in there. Ryan had the idea of knocking a ‘window’ through from the playroom and drilled a test hole to see. The wall is only plasterboard, so it was fine to cut a small hole in it. This could be a really bad idea for some walls so please don’t do this yourself! We checked for wires and pipes and then Ryan widened the hole and cut it out.

Ryan made a window frame out of some old wood we had in the garage and stuck it around the hole using No More Nails. It seems to be holding up well so far! I will be painting it with Frenchic paint that I already have.

The cupboard had unfortunately been wallpapered (badly, like the rest of the house!). We briefly considered painting over it. But the perfectionist in me realised that it would look terrible and annoy me. So we got to work stripping that dingy yellow and beige wallpaper all off.

Ava and Thea were keen to help. Ava even told me she couldn’t sleep as she wanted to get working in it! They worked well as a team, with Thea soaking the wall and Ava scraping. They did this in quite short bursts as it’s so boring. I did the rest and it took hours and hours.

The shelves were really saggy but we thought it would make such a mess to remove them. But I got the girls to sit in it, and realised they need the extra space, as they are only going to get taller!

So Ryan removed them and we stripped the rest of the wallpaper off too.

When the wallpaper was off, we found lots of cracks in the plaster so I had to fill and sand them. Finally I washed all the walls with sugar soap to get the wallpaper paste residue off, ready to paint.

What’s Next for our Den?

The girls are already over the moon with their den. It will take a long time to paint it, and also paint all the woodwork, which has gone all yellow and horrible. We have plenty of white emulsion in the garage so will use that. I plan to use Frenchic paint on the woodwork, that’s leftover from my vintage drinks trolley makeover. It’s so much nicer to paint with (and more eco-friendly) than gloss or satinwood – I’ll never go back to that stuff!

But then the fun starts! The girls’ old cot bed mattress, which we kept for sleepovers, looks like this is the right size to go in the bottom. We have plenty of cushions and blankets to make it cosy. We’ll put up their book shelf and some other bits for storage. We kept the hanging rail, as one day we will want to turn it back into a wardrobe. I plan to make a curtain out of fabric I bought years ago, to cover it up. Watch this space to see how it turns out!