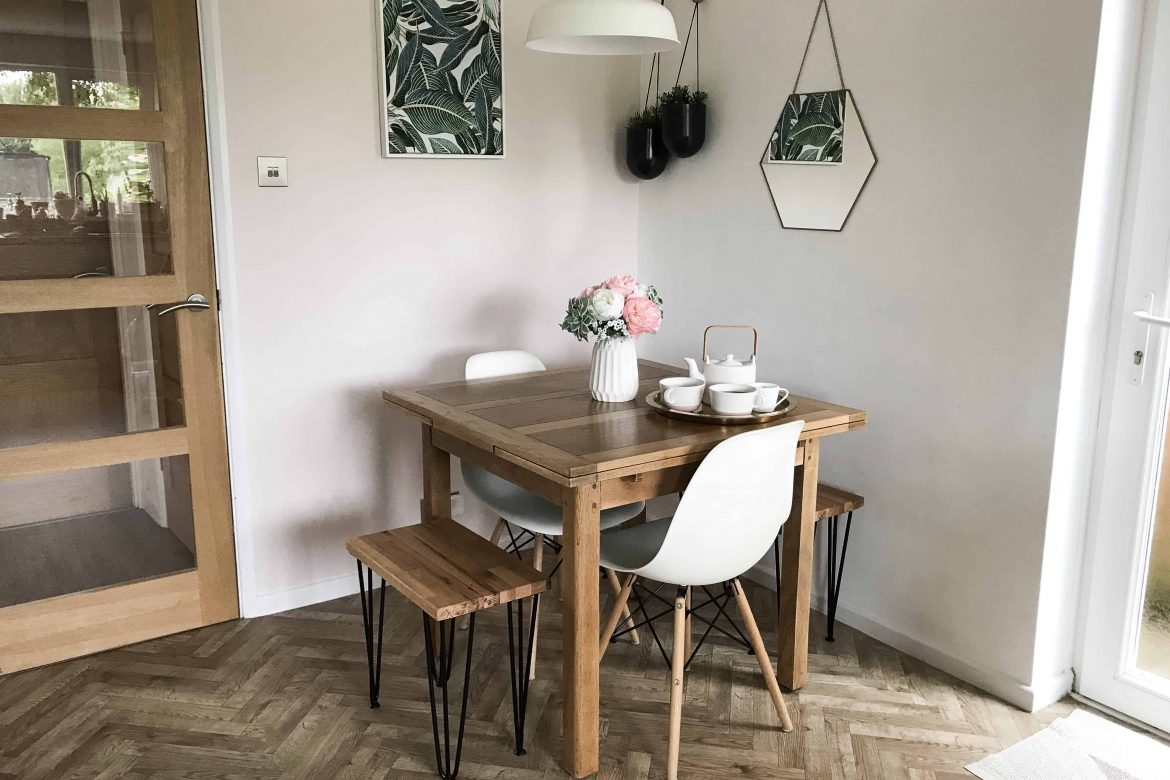 Giving Our Vintage Utility Table a New Lease of Life

I like to buy new things as much as anyone, but I’m also all about revamping or reusing old things as much as possible. It saves resources and saves money, so it’s a win/win for the environment, and for us. We’ve recently had our 1940s utility table restored, and we are so pleased with the result! This is how our utility table looks now it’s been restored, read on to find out more about this vintage furniture.

Why We Love Charity Shop Furniture

This old table has been through the mill. It was already an antique when I bought it in a charity shop over twenty years ago. TWENTY YEARS AGO, how I am that old?! I am quite unusual in that I bought my first house when I was 18, thanks to an inheritance that paid for the deposit and my dad as guarantor. So as a student, with very little to spend, I furnished virtually the whole house from charity shops. I lucked out hugely as I also got an Ercol suite for under £100!

Find out more about how I created a cosy reading corner with an Ercol chair here.

The History of Utility Furniture

I didn’t know much about the history of utility furniture, so I’ve done a bit of research. Utility furniture was produced in the UK after the Second World War. The Utility Furniture Advisory Committee was set up in 1942 with the aim of making sure resources were used sensibly. Raw materials like timber were so scarce it was vital it was used sensibly, making good quality, long-lasting furniture. Because new furniture was rationed, only newly-weds and people who had been bombed out were allowed it. You can read more about Utility furniture here, and you’ll also find a photo of the same table as we have.

I’ve also found a leaflet on this blog post, which shows the table cost £5.15.3. That sounds like a bargain but it was a great deal of money back then. Our utility table is made of oak, so even nearly 80 years on, it’s still solid.

Before Restoring Our Utility Table

I’ve had many, many happy times around this utility table. As a student, eating pasta and drinking cheap wine, and much later as a family, with our funny daughters. It had seen better days even when I bought it. Little did I know I’d still have it all these years later!

I’d love to be able to say I saw it and realised it was a classic piece of furniture that I would treasure in years to come. But I didn’t. It was the right size, and the right price and I liked the way it extended.

That was pre-smart phones, so there aren’t any photos of it in use. But this is how our old utility table looked a few weeks ago.

The horrid old dark varnish was peeling off in places, and the drawer extenders were a completely different colour, as the top had faded so much.

I never liked the very dark varnish, and now it was peeling so much, it all had to go.

After Restoring Our Utility Table

So the time had come to give the utility table some TLC. I’ve been wanting to get it stripped for years, but since we have two kids, I didn’t think it was worth it. It gets regularly crusted over with Weetabix and Rice Krispies and generally had what my dad calls ‘permastick’.

Having had an awful time stripping furniture when I was younger, I decided to call in the professionals. Yes, it cost a lot (in fact, it would have probably been cheaper to buy a new table!) but it was worth it.

Our furniture restorer did a great job on the table, and sanded it and stripped off the varnish. It’s finished with clear varnish, which brings out the colour and the detail of the timber.

If you’re considering restoring your own utility table, there are a few things you might like to know about. The centre panels of the table top are veneer and as such, are easily damaged. We were aware that they could be damaged before it was stripped, but were willing to take the risk. They didn’t fare that well in the restoration process, but we have a young family and things get damaged all the time. So we are not too precious about it!

The veneer panels are a darker colour than the solid timber, which I think gives it real character.

Having the table restored has made our slightly dark dining area so much lighter and brighter.

We have the table like this the majority of the time, but the leaves slide out so that it can seat six. I think it looks great with our midcentury style chairs and the hairpin leg stools we made recently (find out how here).

We are so pleased we invested in restoring what we already had, rather than buying something new. It just goes to show how something made to last really is the best investment, and so much better for the environment.

I hope you’ve enjoyed reading about our vintage Utility Table restoration, why not Pin this for later?