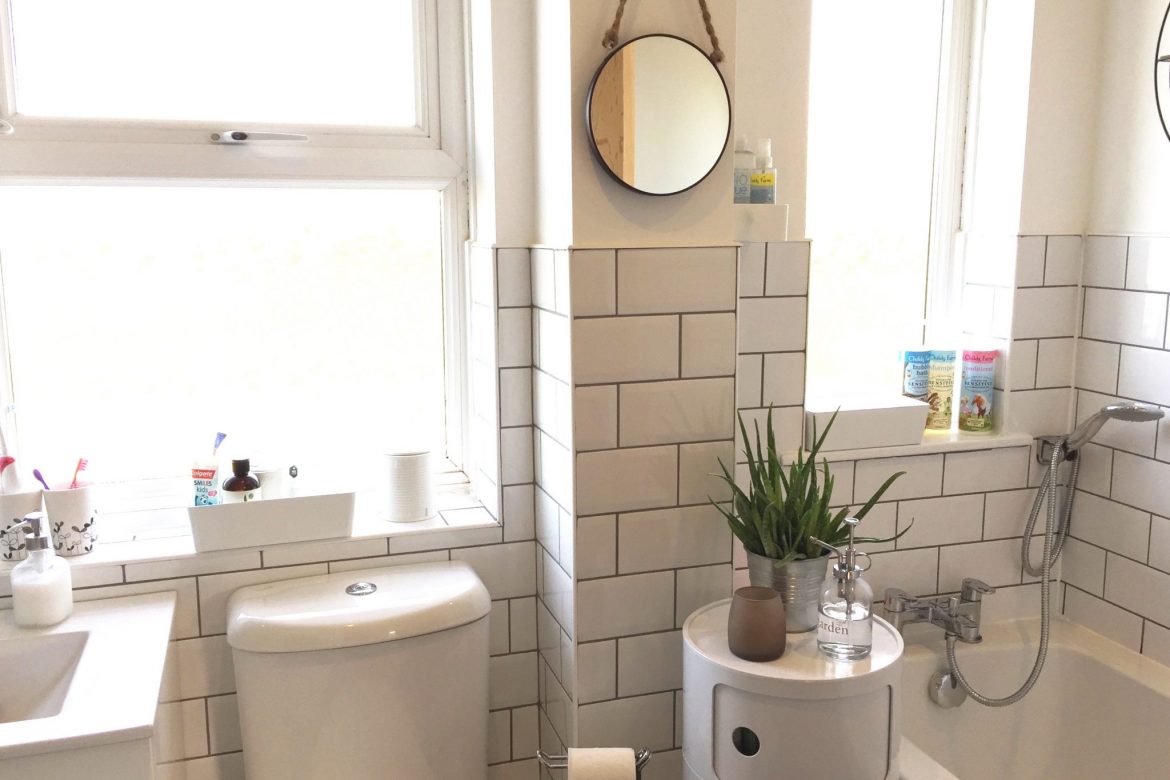 How to Create A Monochrome Bathroom

This blog post contains affiliate links. If you click through a link and buy something, I may receive a small commission. Find my full disclosure policy here.

A monochrome bathroom is a design classic, equally at home in a period or modern home. So when we ripped out our old bathroom, it was an easy choice to go monochrome. Redoing a bathroom in an expensive business, so it makes financial sense to choose a design that won’t date quickly. We redid our bathroom over three years ago and still love it. So let me show you how we created a light, bright, monochrome bathroom.

How to Plan a Monochrome Bathroom

The key to a monochrome scheme is to keep things as simple as possible. Keep any accessories in a very simple colour palette and they’ll really pop against a black, white and grey background.  Don’t be tempted to add much colour, as bottles of shampoo and shower gel are often colourful.

Our bathroom has to be family friendly, so we’ll never get that hotel chic look. By keeping the colour scheme minimal, it helps create a feeling of space and calm. My husband was worried it would be too clinical, but adding plants helps to make it feel more ‘lived in’. Add warmth and texture with wood, like we did with our oak door, the shelves on the circular wall unit. The rope and faux leather on the mirrors also add interest.

How Our Monochrome Bathroom Started Out

When we moved in, we inherited a fairly hideous bathroom, which was not family-friendly at all. These ‘before’ pictures are from the estate agent. 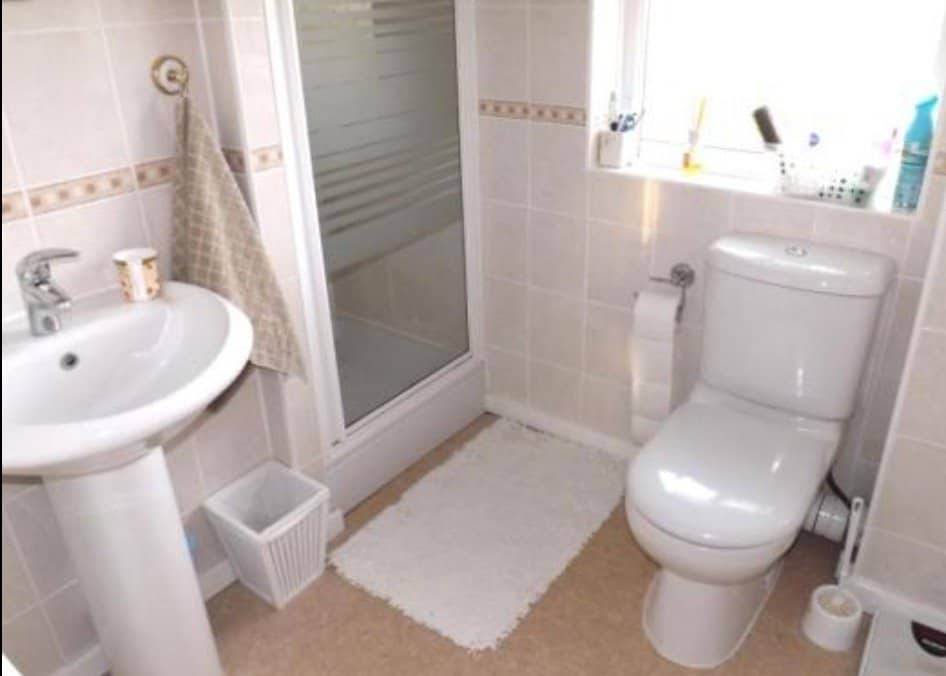 There was a tiny, grotty shower cubicle, a sink on a pedestal, a toilet and a bath, and no storage at all. 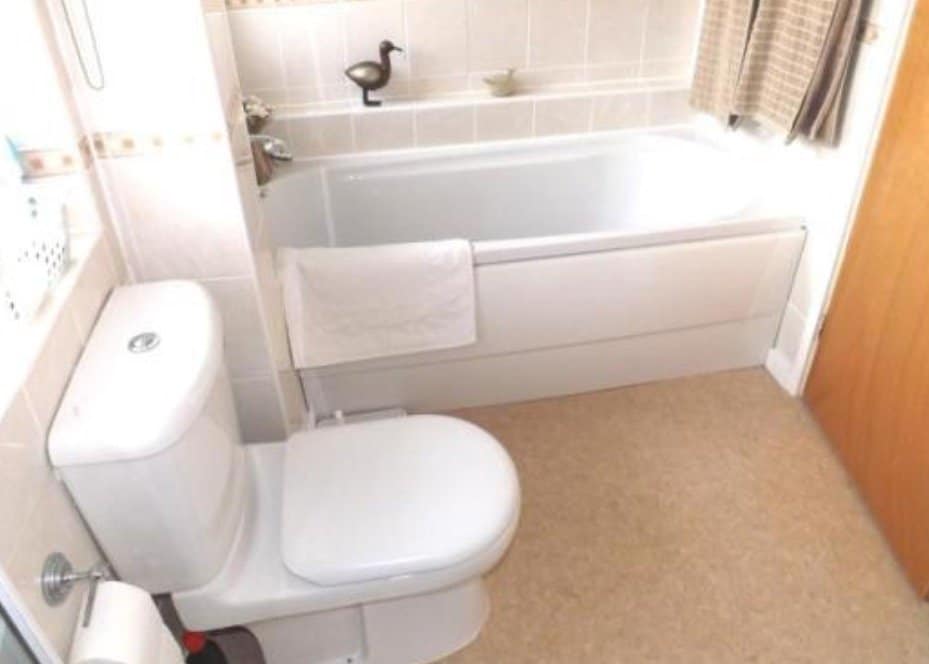 It also had a very sloppy floor and awful beige speckled lino. And the tiles. Don’t even get me started on the tiles! It also had a horrible (and dangerous) wall light.

When the shower started leaking through our (freshly painted) kitchen ceiling, we realised that our bathroom renovation would have to come sooner, rather than later.

How We Changed The Layout Of Our Monochrome Bathroom

I knew from the start I wanted a monochrome bathroom, but the layout was the first issue we needed to tackle. We originally had a large airing cupboard next to the bathroom. We realised that if we could knock this through, we could create a big walk in shower. It turned out to be a fairly easy job, as it was only a stud wall. It has made a huge difference and is a much better use of the space. Here is my only ‘in progress’ shot: 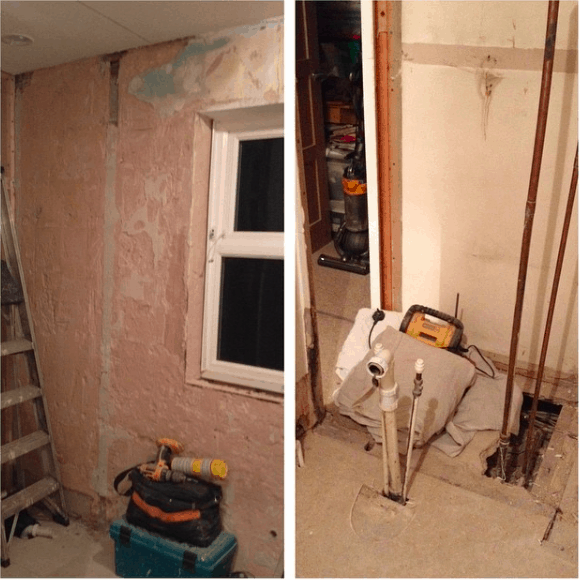 The step ladder on the left is in the shower area and the pipes are from the old sink. You can just see the door frame of the airing cupboard, which was eventually plaster boarded up.

The shower is the same size as a bath, so we have a nice big space to dry off without getting water all over the floor. The old shower was a tight squeeze, so having a lovely big walk in shower is a real luxury. 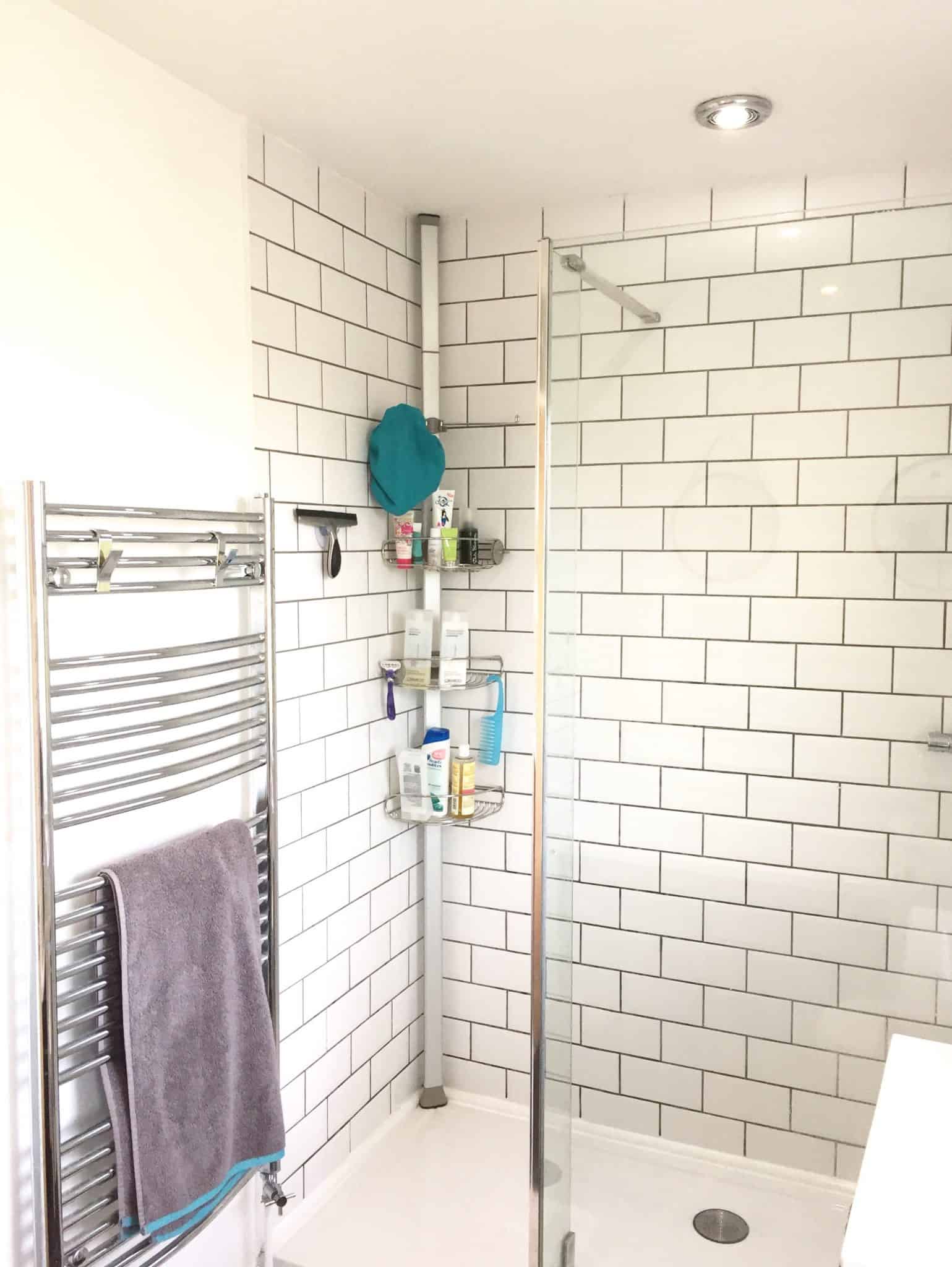 This is where the airing cupboard was. 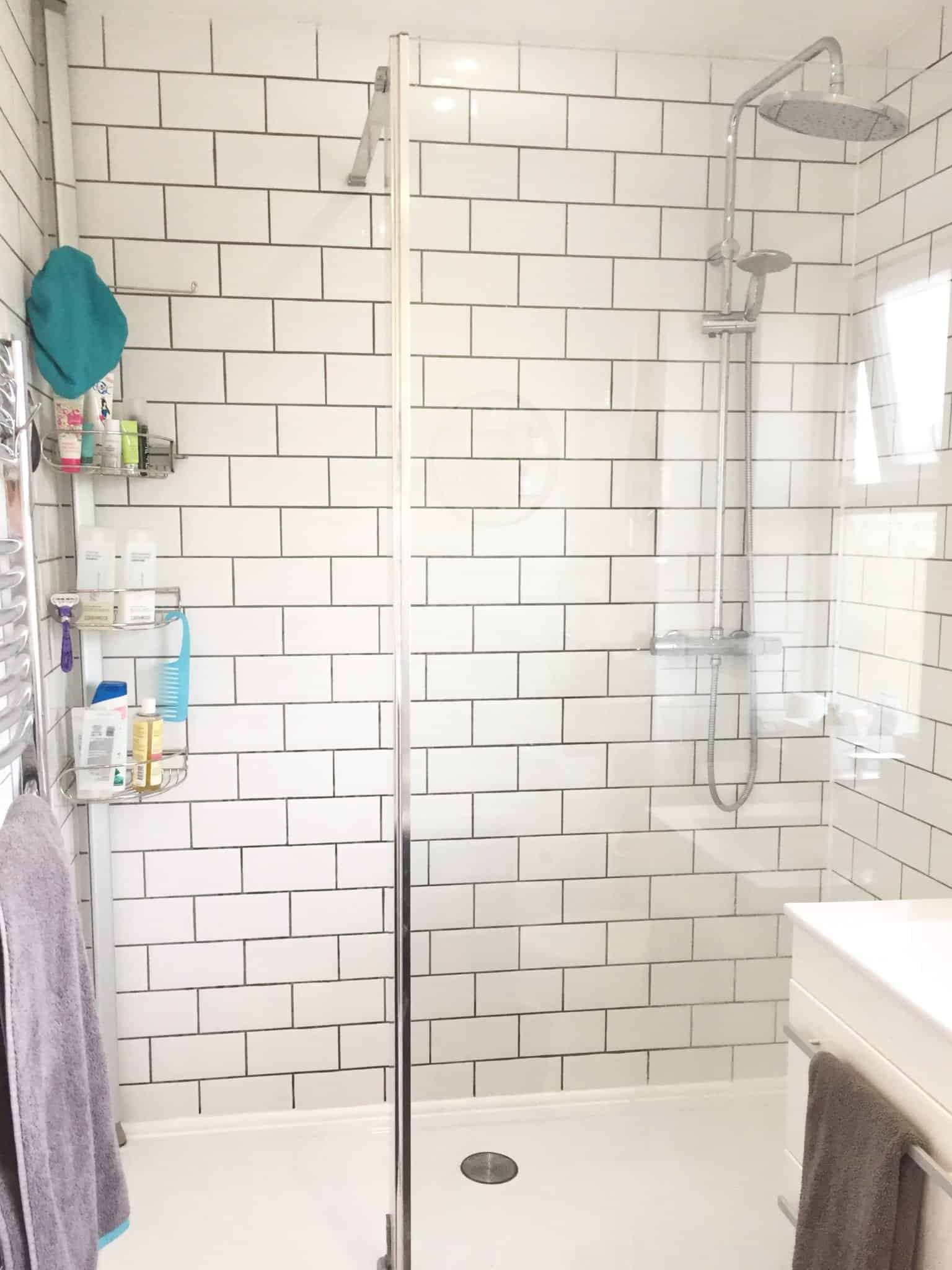 We had the whole area tiled in white metro tiles with grey grout. 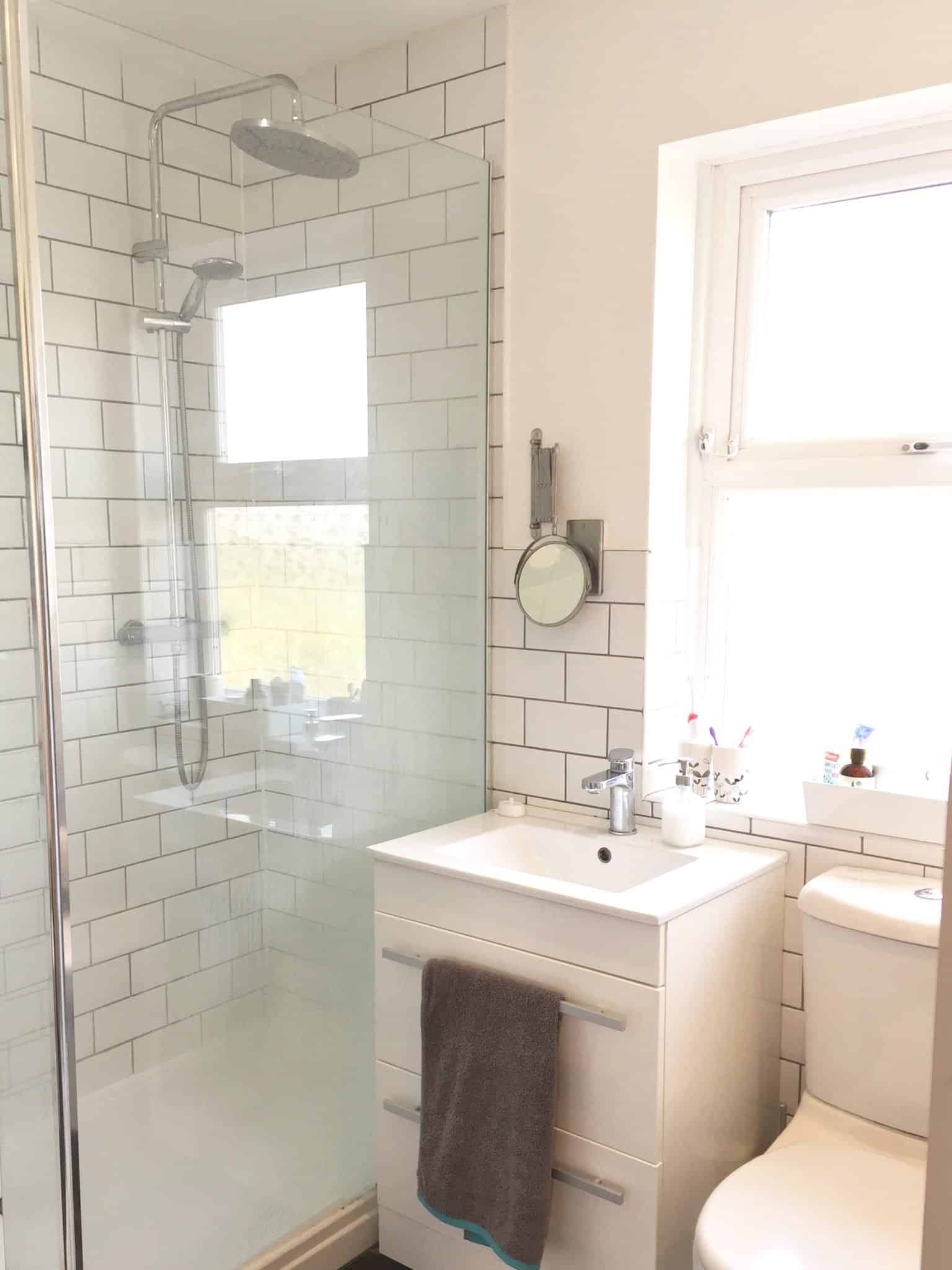 We have a fixed head waterfall shower, with a removable extra shower head.

Having such a large shower has balanced the bath on the other side of the room, making it more symmetrical, as well as bigger. 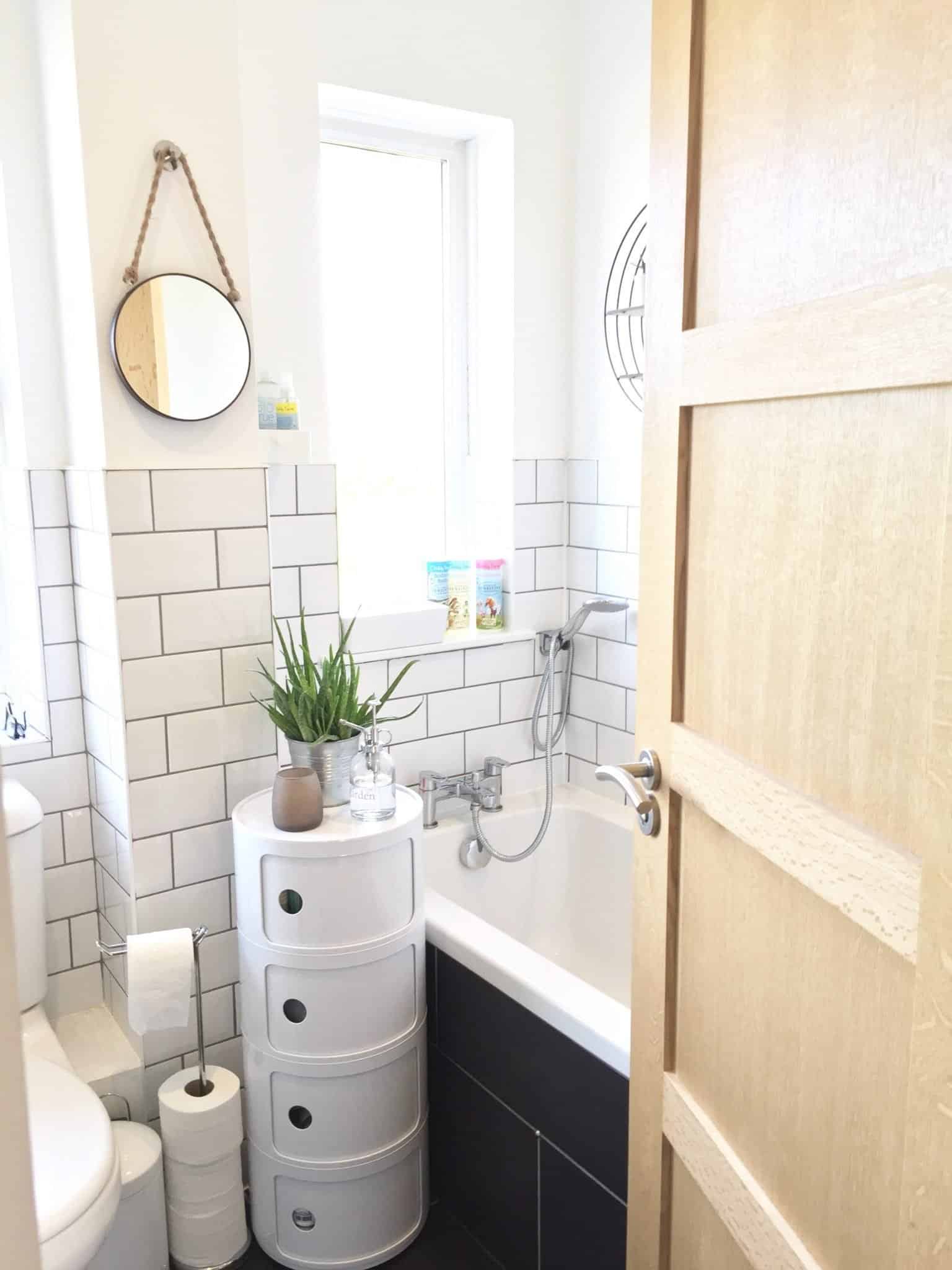 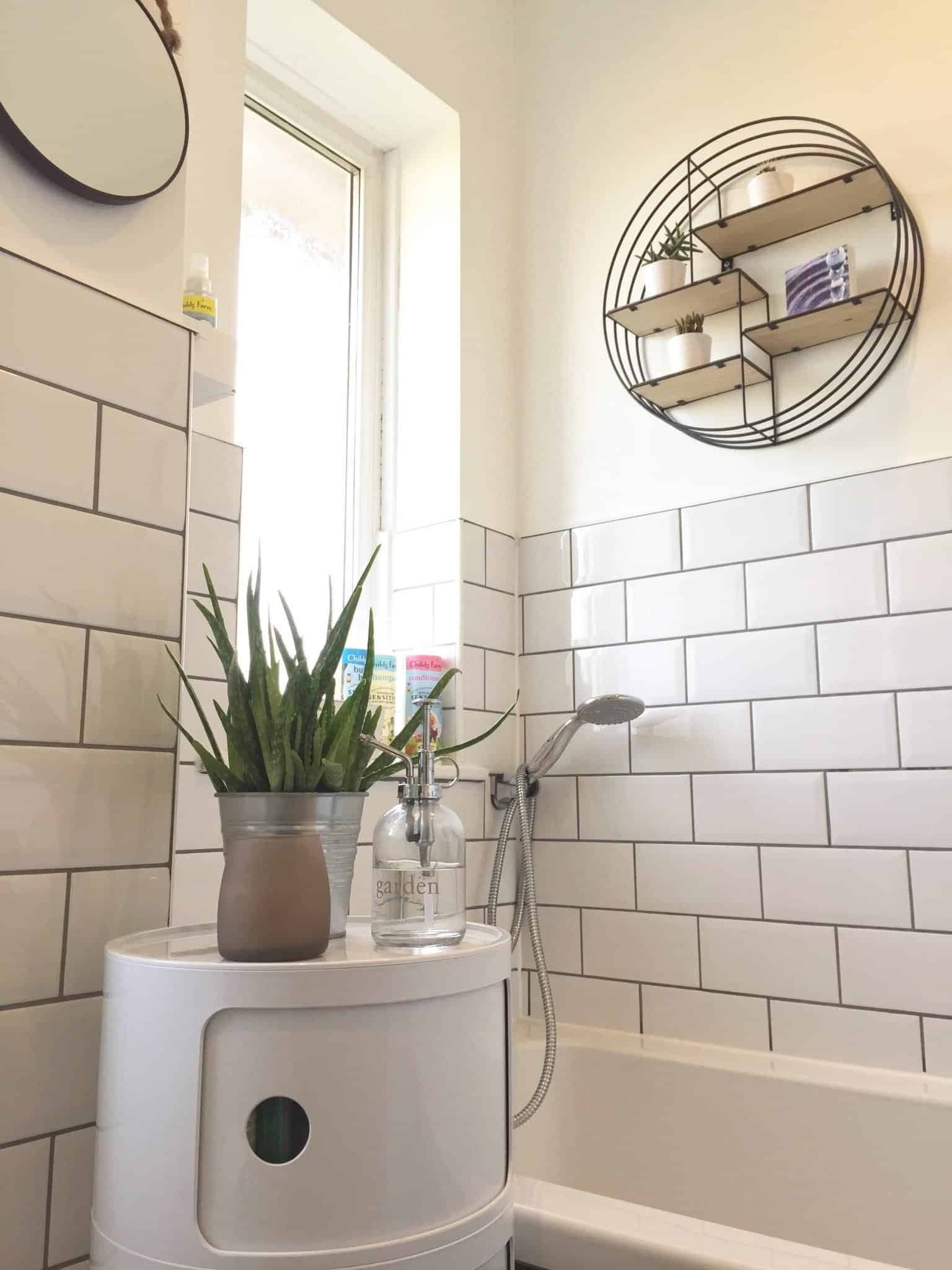 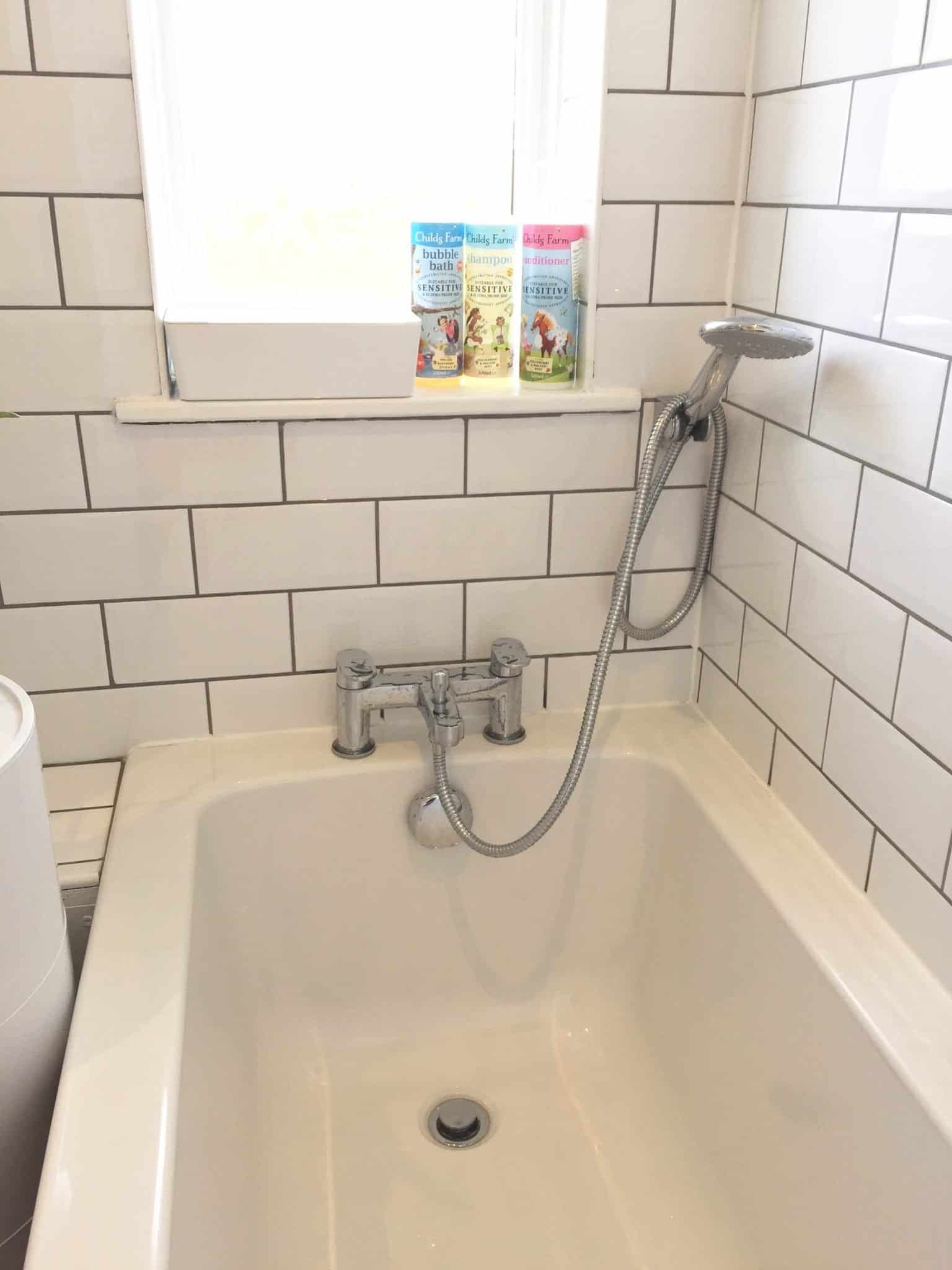 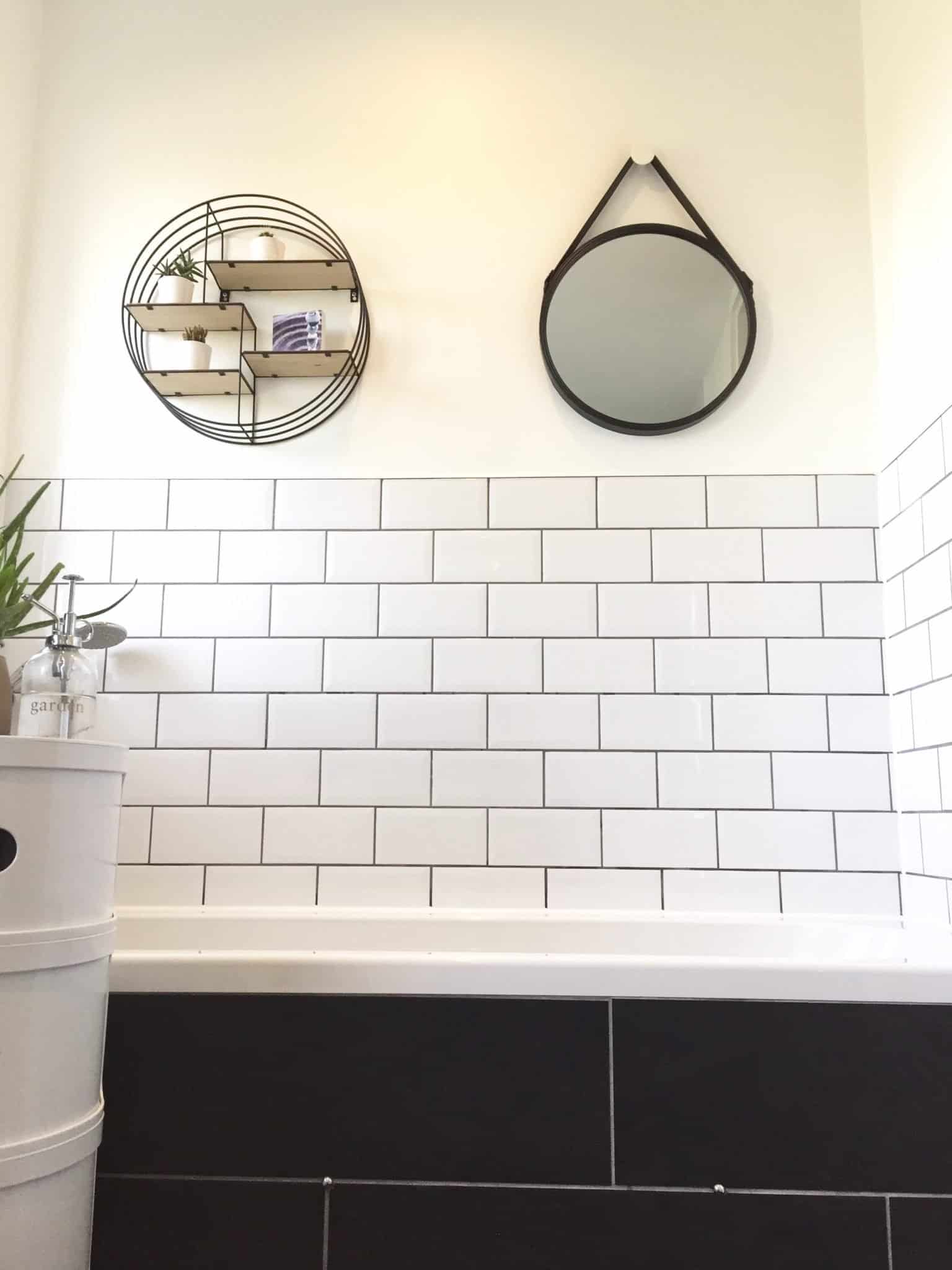 Bathroom Suite For A Monochrome Bathroom

We got all of the bathroom ‘furniture’ from a local supplier, as we had met the man who ran it and he was so helpful and reliable. He visited the house to help us design the new layout. I would really recommend this step if you can, as it helped to maximise the space. The only thing we didn’t buy was a toilet. The existing one was absolutely fine, so we kept that but got a new seat. Adding storage was essential, so we chose a large sink on a vanity unit, with two large drawers. Because we lost the airing cupboard, we store towels in there, and keep toiletries in the cylinder storage unit. This helps to keep clutter under control, which is key to a minimal monochrome look.

All of the tiles are from ToppsTiles, as they were working with our bathroom supplier and offered a discount.  We chose very dark grey ceramic floor tiles, white metro wall tiles and mid-grey grout. We also got underfloor heating, as we knew from our old house that tiled floors get very cold in winter. I would recommend going into the shop to choose your tiles, especially floor tiles, as you want to make sure they feel nice and are non-slip. The large-format tiles we chose help to make the space look larger, and we had our tiler make a bath panel too, to create the illusion of a bigger floor area.

Accessories To Pull The Monochrome Bathroom Together

I found the gorgeous circular shelving in Tiger.

The circular shelves are up, finally! 👐🏻 it’s the finishing touch my #monochrome #bathroom needed, you can see the full room tour #ontheblog {link in my bio} My little cacti fit perfectly, and we got the picture when we were in New Zealand about 12 years ago. #shelfie #mymonovibes

I spotted the mirror on Instagram and went to find it. There was also the smaller mirror so I got both, intending to take one back, but ended up keeping both. Luckily they were from B & M, so were cheap. They don’t sell them any more but I found a similar one on Amazon*, or there are loads of tutorials on Pinterest if you want to make your own.

Loving the #circle #mirrors in my newly finished #bathroom – they were a steal from @bm_stores (thanks to @mkmamavibes for the tip off!) One has a rope strap, the other faux leather. They help brighten up the #monochrome room – you can see more on my blog {link in bio😍} #allthingsmetric #mymonovibes

The white circular storage unit was from BHS before it closed, and I love how modern it is. You can find a similar one at Houseology. I think it goes well with the white bin and matching toilet brush, which were £5 and £3 respectively, from Wilko.

The Simple Human extendable shower caddy is from Lakeland or Amazon, and is pricey, but has a five year guarantee and is really solid and stable, so hopefully worth it.

I added the mini cacti and aloe vera from IKEA, and got the plant spritzer from Waitrose.

The shiny white plastic boxes are also from IKEA and help to keep clutter hidden away. They are not dishwasher friendly though, I discovered to my cost! So this is the second set.

I chose plain dark grey towels with turquoise edges for Ryan, and coral edges for me from Dunelm.

The monochrome beakers are my MissPrint at John Lewis. They go in the dishwasher so are great to use as toothbrush mugs.

We actually got different shower heads from these originally, but were given water saving ones by Anglian Water as part of their drive to reduce water wastage.

What I Would Do Differently

In retrospect, it wasn’t the best idea to have the sink next to the shower. Water gets splashed over the glass all the time, and leaves water marks. We have also had the occasional toothbrush casualty, when they fall off the windowsill or sink into the toilet. But this was the best layout we could get without moving the toilet and all the pipework.

We have three lights in the ceiling, and I think we could do with an extra light on the wall above the sink. We did think about it, but as there is a window, it would have looked a bit odd as it wouldn’t have been centred. Two of our lights are a warm tone, and the one above the shower, which also has an extractor fan, is a white tone, so that slightly grates on me as I want things to match.

We paid extra for special glass for the shower enclosure, which was supposed to mean it was easier to clean. But I don’t feel it makes the slightest bit of difference to normal glass, unfortunately!

And finally, we got an extendable shaving mirror from IKEA. And it hasn’t stood the test of time. As much as I love IKEA I have to admit it was a false economy, and in this case we got what we paid for.

So what do you think of our bathroom? Would you have done anything differently? I’d love to know what you think, please leave me a comment.

Not ready to create your dream bathroom? Why not pin the details to Pinterest for later?